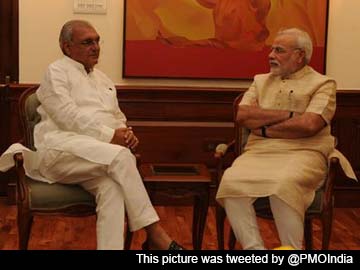 Sources close to Mr Hooda said the Prime Minister had personally invited Mr Hooda yesterday and the gesture amounted to extending an olive branch to the miffed Chief Minister.

In a picture tweeted by the Prime Minister's Office, Mr Hooda was seen sitting with PM Modi, minus the bitterness that saw him declaring earlier, "In future, I will never attend a function with the PM."

That pledge emerged after being booed by a crowd at a function he attended with Mr Modi in Kaithal on Wednesday, for the launch of a road project. The same crowd roared with approval at Mr Modi's speech.

Mr Hooda alleged later that the crowd was organised by the BJP.

After his outburst, another Congress Chief Minister, Prithviraj Chavan, decided to skip the launch of the Nagpur Metro in Maharashtra on Thursday, saying he experienced similar humiliation at a public event before.

The BJP sneered that the Chief Ministers of Haryana and Maharashtra should read the writing on the wall. Both states will vote for new governments later this year.

Promoted
Listen to the latest songs, only on JioSaavn.com
In the national election three months ago, Mr Modi's party, the BJP, won most of the Lok Sabha seats in Maharashtra and Haryana. The party hopes to continue its winning streak in the state polls.

Varanasi's Gyanvapi Mosque: Report, Meant For Court, Is Made Public