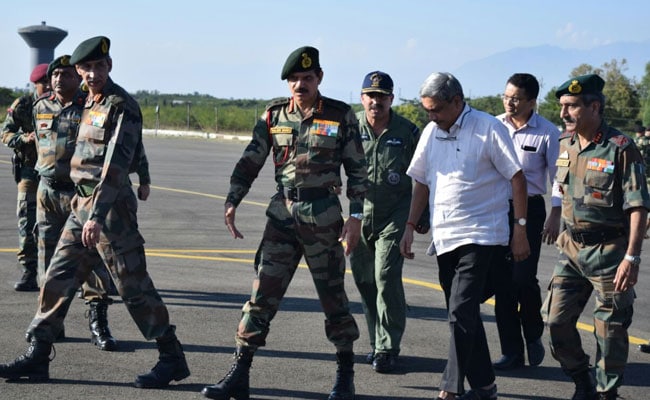 Manohar Parrikar was also briefed about the security grid along the Line of Control.

New Delhi: Taking a tough stance against the terrorists involved in Uri attack, Defence Minister Manohar Parrikar on Sunday instructed the army to take firm action against those responsible.

"The supreme sacrifice of 17 brave soldiers will not go in vain. My salute to them. Reviewed situation in Kashmir following Uri attack with Army Chief & Commanders. Instructed to take firm action against those responsible," the defence minister tweeted after his Srinagar visit.

Mr Parrikar flew to Srinagar earlier in the day and was briefed by the Northern Army and Chinar Corps Commanders Lt Gen DS Hooda and Lt Gen Satish Dua respectively at Srinagar.

The briefing included discussions on the soft points and how the terrorists managed to get in.

Mr Parrikar also visited the injured soldiers at the hospital in Srinagar and instructed the authorities to provide best possible treatment.

Mr Parrikar has in the past said "individual or organisation" harming the country "should also receive the pain of such activities".

The defence minister was also briefed about the security grid along the Line of Control and the hinterland also covering the deployment and employment of the additional forces that have been recently inducted into the Valley.