After PM's Speech At UN, His Office Tweets About "Selfie Requests"

"Congratulatory messages pour in after the UN General Assembly speech and so do the selfie requests," Prime Minister Narendra Modi's office tweeted 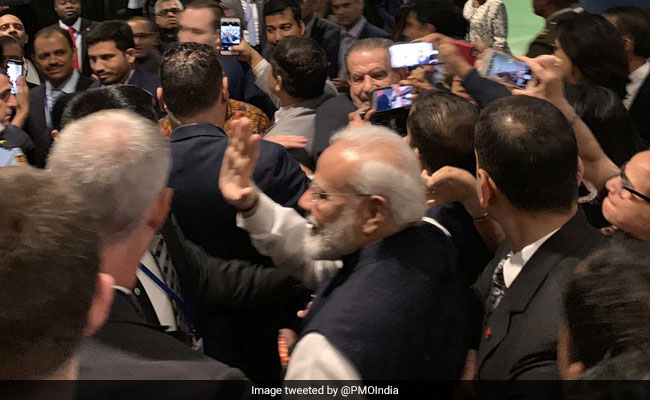 UN General Assembly: PM Narendra Modi is surrounded by people after his speech at UNGA

Prime Minister Narendra Modi office's on Friday tweeted a photo of him being surrounded by people for "selfies" after his speech at the United Nations General Assembly in New York, where he highlighted India's contribution to national and global development.

PM Modi in his speech to world leaders towards the end of his week-long official visit to the US touched a wide range of subjects, from culture and trade to terrorism and climate change.

"Congratulatory messages pour in after the @UN General Assembly speech and so do the selfie requests. Those who were able to witness PM @narendramodi's speech at the UN personally convey their good wishes to him," the Prime Minister's Office (PMO) tweeted on its official handle.

It had a photo of PM Modi being surrounded by smiling faces, with mobile phones held high above their heads inside the crowded room. PM Modi, in a white kurta and black jacket, is seen waving at them.

Congratulatory messages pour in after the @UN General Assembly speech and so do the selfie requests.

Those who were able to witness PM @narendramodi's speech at the UN personally convey their good wishes to him. pic.twitter.com/UXiSMFh4hp

In his speech, PM Modi told the world leaders India will "take the lead when it comes to furthering global prosperity".

"This is seen when India takes a lead in harnessing renewable energy, unites the world to come together for disaster management, and contributes among the highest to UN peacekeeping missions," PM Modi said. "After all, when India prospers, the world will naturally prosper."

He said world needs to unite and have a consensus on fighting terrorism. "Terrorism is one of the biggest challenges before humanity," PM Modi said in a 20-minute speech.

He highlighted India's big contribution to fighting climate change despite being one of the lowest emitters of carbon emissions. "Per capita wise India's contribution to global warming is very low, but we are a leading nation in mitigation plans," PM Modi said.

"Global warming has also increased the frequency and ferocity of natural disasters. That's why we have formed the CDRI," PM Modi said, referring to the Coalition for Disaster Resilient Infrastructure that India has proposed at the ongoing UN meet. The CDRI seeks to include national governments, UN agencies, multilateral development banks and the private sector, among others, to build new and repair infrastructure systems that can withstand climate risks.