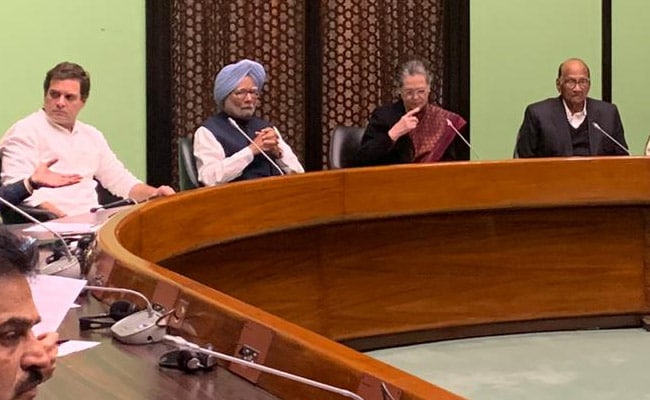 CAA protest: Sources said the DMK has been upset with the Congress's local leaders in Tamil Nadu.

Leaders from 15 political parties attended a meeting of the opposition in the Parliament House to discuss the contentious citizenship law, National Register of Citizens and the countrywide student protest that is gathering momentum every day. But in a blow to opposition unity, six key parties - including the Trinamool Congress, BSP, Shiv Sena, DMK and the Samajwadi Party - are skipping the meet. Arvind Kejriwal's Aam Aadmi Party said it was not even invited for the meeting.

Alleging that the Congress has "joined Urban Maoists and Naxalites," Union minister Ravi Shankar Prasad said, "The resolution is neither in national interest nor in the interest of security. It is also not in the interest of those minorities who fled neighbouring countries to escape persecution".

It would only "make Pakistan happy" he added.

Sources said the DMK has been upset with the Congress's local leaders in Tamil Nadu.

Mamata Banerjee, too, stayed away following the clashes between her party workers and those of the Left and the Congress during last week's trade union strike. Pointing out that the meeting had been her idea, she said the clashes between the workers of her party and the Congress and the Left during last week's trade union strike ruled out her attendance.

Mayawati has been at loggerheads with the Congress since all six MLAs of her Bahujan Samaj Party in Rajasthan crossed over to the Congress in September.

In her address Congress chief Sonia Gandhi, said the government has "let loose a reign of oppression, is spreading hatred and trying to divide our people along sectarian lines".

The Constitution, she said, is being undermined and the instruments of governance misused. "Students and the young have in particular been targeted. In several parts of the country, especially in Uttar Pradesh, large sections of the population are being harassed and attacked," she said.