The BJP suffered a defeat in Delhi at the hands of the Aam Aadmi Party which won the polls for the third consecutive time on the plank of good governance. The saffron party won only 8 seats while the AAP bagged 62 in the 70-member House. 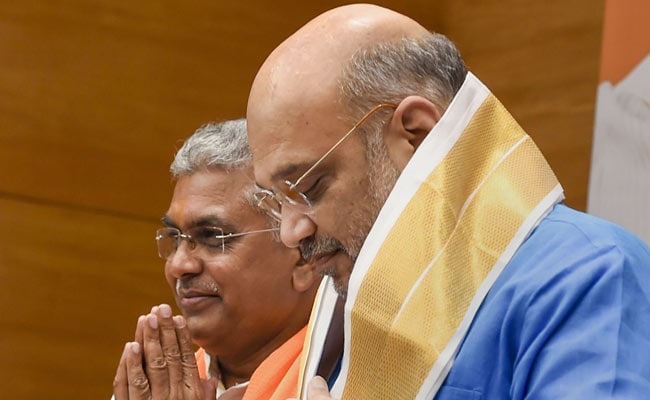 Following the BJP's defeat in Delhi Assembly elections, the party's poll managers of West Bengal are divided whether to continue its aggressive strategy on the CAA-NRC or tone it down and lace it with alternative policies of governance.

The BJP suffered a defeat in Delhi at the hands of the Aam Aadmi Party which won the polls for the third consecutive time on the plank of good governance. The saffron party won only 8 seats while the AAP bagged 62 in the 70-member House.

The differences of opinion in Bengal BJP came out in the open after Swapan Dasgupta, the party's Rajya Sabha MP and a prominent leader, said ideological issues must be supplemented by governance agenda.

On the other hand, BJP state unit chief Dilip Ghosh advocated to carry on its aggressive strategy saying the party needs to stick to its ideological issues.

"Three obvious lessons for BJP after Delhi: 1) Ideological issues must be supplemented by a solid governance agenda 2) There has to be a vibrant local unit with mohalla presence, & not merely during polls 3) A chief ministerial face is a must. Modi-Shah can't be a substitute," he had said in a tweet on Tuesday after the Delhi polls results are out.

Mr Dasgupta's views were echoed by the BJP state vice president Chandra Kumar Bose who felt that the party should have a Bengal specific strategy. "Agree with Swapan Dasgupta that Bengal must have a CM face who could match up to the stature of Mamata Banerjee. In public life-nothing is private! The BJP must have a Bengal Centric strategy for WB (sic)"

A roadmap stating development schemes must be projected," Mr Bose tweeted on Thursday. In West Bengal, the BJP had won 18 out of the 42 seats and swept all the seven constituencies in Delhi in the 2019 Lok Sabha elections.

"But within a few months, we see that the results have changed completely in Delhi. So, we cannot take it for granted that we will win the Assembly polls just because we had won 18 seats in the Lok Sabha," a senior BJP leader said.

"So we need to change our strategy for the state elections. It is not necessary that what works for national elections will also work for state polls. Our campaign should not only highlight implementation of the CAA and the need for a nationwide NRC. It should also lay similar stress on alternative and better policies of governance," he said.

The proposed countrywide NRC to weed out infiltrators and the amended citizenship law have emerged as the latest flashpoints in the state, with the ruling TMC opposing them tooth and nail, and the BJP pressing for their implementation.

A BJP leader close to state president Dilip Ghosh is of the opinion that there is no need to change the party''s strategy in West Bengal, as aggressive politics has yielded positive results for the party in the past.

"If you want to counter a party like the TMC, you have to keep up the tempo and your aggressive strategy. It has helped us. Our campaign on the issues of the new citizenship law and the proposed NRC had yielded good results in the Lok Sabha polls."

"If we change our strategy, it will be seen as we are retreating. This would send a wrong message to our party cadres. Obviously, we will have an alternative set of governance policies but that doesn't mean diluting our campaign over CAA-NRC," he said.

When contacted, Mr Ghosh told news agency Press Trust of India that the party needs to stick to its ideological issues. "Whatever Swapan Dasgupta had said, the party high command will look into it. We are campaigning on an alternate model of development but that doesn't mean we will ignore ideological issues," Mr Ghosh said.