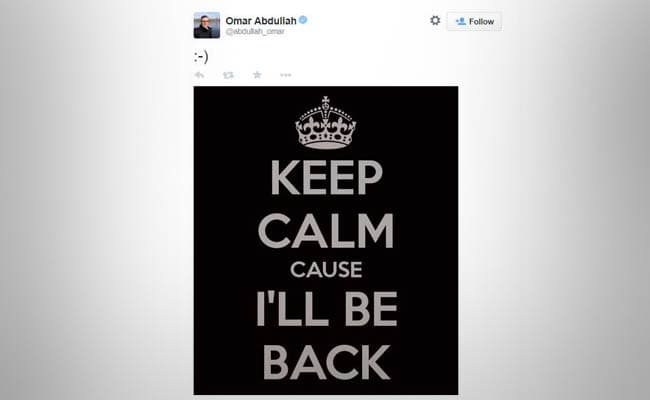 Srinagar: Moments after Omar Abdullah resigned as Jammu and Kashmir chief minister on Wednesday, his Twitter account announced in boldface - "Keep calm cause I'll be back."

Mr Abdullah, who lost his bid for a second term, has been tweeting away since Tuesday, when counting of assembly poll votes threw up a fractured verdict.

After handing over his resignation today, Mr Abdullah promptly changed his bio to: "Former CM of J&K; MLA from Beerwah, Budgam (the gateway to Gulmarg)."

He also tweeted about it, saying, "And You know you are a social media junkie when reality doesn't hit home till you read it on your updated @twitter bio ;-)"

The 44-year-old is among India's most social media savvy politicians and has over 740,000 followers on Twitter.

Since the poll results on Wednesday, he has kept up a steady flow of comments.

"Incidentally in 2002 Mufti became CM with 16 MLAs & NC with 28 sat in opposition so excuse me if I don't oblige by rolling over to play dead," he posted today.

He had told NDTV in an interview yesterday that with the polls delivering what he called a "messy" verdict, his National Conference party cannot be ignored as it has the support of 17 legislators.

The People's Democratic Party (PDP) of Mufti Mohammad Sayeed emerged the largest party with 28 seats in the 87 member assembly. The BJP won 25 seats in its best-ever performance in the state. The National Conference won 15 seats - and claims the support of two more - and the Congress, 12.

More than one combination is possible for the next government, even though the BJP and the PDP are in the best position to take power.

"Expectations were hyped & twisted to such an extent that now 17 feels like a victory & 28 a defeat. Go figure!!!!!" he tweeted last night in a barb at the PDP.

Promoted
Listen to the latest songs, only on JioSaavn.com
This morning, he couldn't help but comment after resigning, "6 years ago I drove in to stake my claim to form a government in J&K, now I'm driving in to resign. The wheel comes full circle."

Off Twitter, Mr Abdullah said he is headed to Delhi and then to London to meet his parents both of who have had surgeries recently.
Comments
Omar AbdullahTwitterJammu and Kashmir election resultsJ&K elections