The RJD registered emphatic victories in Araria Lok Sabha and Jehanabad assembly seats yesterday. The BJP was defeated in Araria though it succeeded in winning Bhabhua assembly seat. 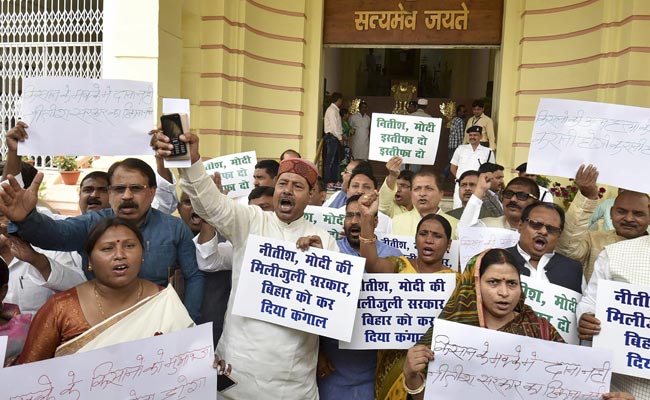 RJD legislators gathered at the main gate of the state assembly and shouted slogans against the NDA.

Patna: Buoyed by the bypoll victory in Bihar, RJD MLAs today staged a demonstration outside the state assembly demanding resignation of Chief Minister Nitish Kumar over the ruling coalition's defeat in the by-elections.

The RJD registered emphatic victories in Araria Lok Sabha and Jehanabad assembly seats yesterday. The BJP was defeated in Araria though it succeeded in winning Bhabhua assembly seat.

The ruling JD(U) suffered a crushing defeat in Jehanabad.

RJD legislators gathered at the main gate of the state assembly and shouted slogans against the NDA coalition in Bihar.

"The results of the bypolls are an expression of public resentment against Nitish Kumar, who betrayed the mandate by walking out of 'Mahagathbandhan'," RJD MLA Bhai Virendra, who led the slogan-shouting MLAs, told reporters.

"The voters have rejected 'double engine' governments of NDA at the Centre as well in Bihar. Hence, Nitish Kumar should tender resignation," he said.

HAM president Jitan Ram Manjhi, who had quit NDA on the bypolls eve to join hands with RJD, was present with Tejaswi Yadav last evening to celebrate the victory at Araria and Jehanabad.

Mr Tejaswi Yadav, who had attended UPA chairperson Sonia Gandhi's dinner for non-BJP parties on Sunday last, had spearheaded the RJD campaign for the bypolls in absence of Lalu Prasad, who is in Ranchi jail in connection with fodder scam cases.

Mr Nitish Kumar, who had fought the assembly polls of 2015 as part of the Grand Alliance comprising RJD and Congress, walked out of the coalition last year following corruption cases against his then deputy Tejashwi Yadav.

The BJP, which was till then in opposition, offered its support to Mr Kumar following which the latter formed a new government and returned to the NDA.

"They must remember that we won Bhabhua. Moreover, they should analyse the results of Araria, which comprises six assembly segments. In four of these, BJP candidates had a lead. Massive leads in just two assembly segments tilted the result in favour of the RJD candidate," Mr Yadav told reporters.