The five-day annual meeting of AfDB, being held in India for the first time, is being attended by 54 African regional members and 27 non-regional member countries of the organisation. 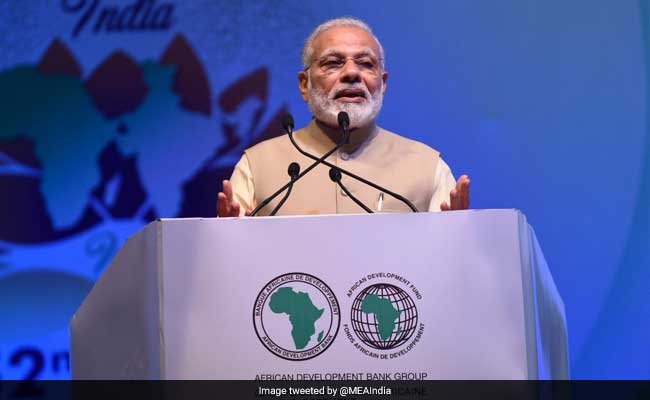 PM Narendra Modi said India was working with US and Japan to support development in Africa.

Gandhinagar: Prime Minister Narendra Modi on Tuesday said that Africa was a top priority for his government's foreign and economic policy and pitched for an Asia-Africa Growth Corridor with the support of Japan. PM Modi, who officially inaugurated the 52nd Annual Meetings of the African Development bank (AfDB) at Mahatma Mandir in Gandhinagar, said India's partnership with African countries was free of any conditions and will remain demand-driven.

"After assuming office in 2014, I have made Africa a top priority for India's foreign and economic policy," he said.

The five-day annual meeting of AfDB, being held in India for the first time, is being attended by 54 African regional members and 27 non-regional member countries of the organisation.

Around 3,000 delegates are taking part in the event with the theme 'Transforming Agriculture for wealth creation in Africa'.

Finance Minister Arun Jaitley, in his remarks, said there was possibility of disruption in global economy due to inward looking policies of some advanced countries and this has danger of frittering away gains of globalisation.

He said African economies were growing at a faster pace and noted that "21st century would not be Asia's alone but would belong equally to both Asia and Africa".

Mr Jaitley said India leaves it to its partners to decide their priorities and believes this is the most enduring model of taking the relationship forward.

Referring to "High 5s" priority areas of AfDB that cover energy, healthcare and pharma, agriculture, Industrialization and e-Governance, Mr Jaitley said these were similar to agendas of the government.

He said there was huge possibility of the agriculture sector in Africa benefiting from the Indian experience.

PM Modi, in his speech, said that India was working with the United States and Japan to support development in Africa.

Prime Minister Narendra Modi's remarks comes days after China launched its One Belt One Road (OBOR) initiative that seeks to connect China with major markets including those in Africa, Middle East and Central Asia. India has not joined OBOR.

"In our joint declaration, we mentioned an Asia Africa Growth Corridor and proposed further conversations with our brothers and sisters from Africa," he said.

PM Modi said Indian and Japanese research institutions have come up with a vision document in consultation with think tanks from Africa.

"The idea is that India and Japan, with other willing partners, would explore joint initiatives in skills, health, infrastructure, manufacturing and connectivity," he said.

PM Modi said his government has made unprecedented increases in the last three years in investment in railways, highways, power, and gas pipelines and said no village in the country will be without electricity by next year.

PM Modi said India offered $10 billion for development projects over the next five years during the India-Africa Summit held in 2015 in New Delhi which was attended by all 54 African countries.

Terming 2015 as a "watershed", he said India had also offered grant assistance of $600 million to the African countries.

He said India has extended 152 lines of credit to 44 countries of nearly $8 billion.

It has contributed to all of the bank's general capital increases and pledged $29 million for the most recent African Development Fund replenishment.