Adnan Sami shared the first pictures of his daughter Medina Sami Khan, who was born in May this year 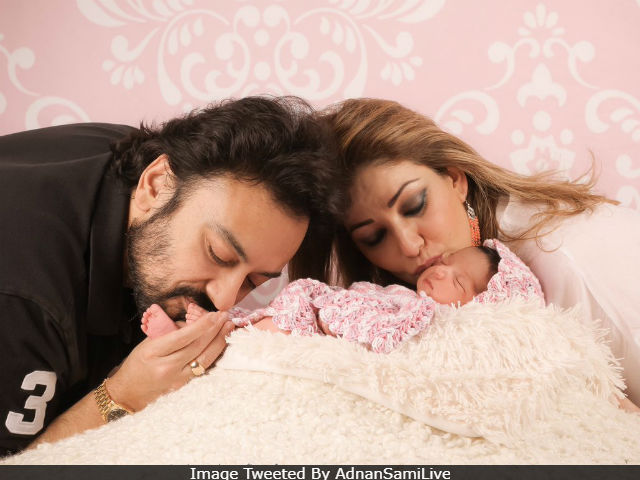 New Delhi: Singer Adnan Sami shared the first pictures of his daughter Medina Sami Khan on Twitter recently. Medina, born in May this year, is Adnan and wife Roya Faryabi's first child together. "It gives me great pleasure in sharing the photos of our beloved daughter Medina with you... May God bless her always," the 43-year-old singer captioned his post. In one of the pictures, Adnan and Roya are also seen posing with the baby. Medina's birth was announced by Adnan on social media with a post that read, "Roya and I have been blessed with an angelic baby girl. We've named her Medina Sami Khan. Prayed for a daughter. Over Joyed! #daddyslittlegirl."

It gives me great pleasure in sharing the photos of our beloved daughter Medina with you...
May God bless her always... pic.twitter.com/FbSOPLxtqC

Roya Faryabi is Adnan Sami's third wife. The couple married in 2010. Adnan was previously married to Zeba Bakhtiar (1993 to 1997) and Sabah Galadari, whom he divorced in 2009.

Super excited to begin my new journey with #AfghanTheFilm! Here's the Official Poster for the film @SapruAndRao@AfghanTheFilmpic.twitter.com/Nbdgg4annz

Promoted
Listen to the latest songs, only on JioSaavn.com
Adnan Sami has provided playback for songs like Bhar Do Jholi Meri (Bajrangi Bhaijaan), Noor E Khuda and Mera Jahan. He is also famous for albums such as Tera Chehra and Kabhi To Nazar Milao.

Adnan Sami, a Pakistani singer, got Indian citizenship in December 2015.

J&K Should Be Given Full Statehood, Polls Should Be Held Soon: Congress's Adhir Ranjan Chowdhury