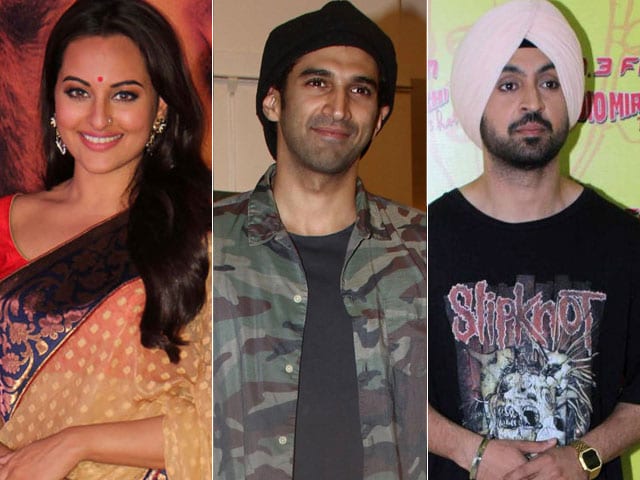 New Delhi: Sonakshi Sinha, Aditya Roy Kapur and Diljit Dosanjh have been roped in for a new movie, to be co-produced by Wiz Films and Vashu Bhagnani. The film starring the Dabangg actress, the Fitoor star and the Punjabi singer-turned actor, will mark Wiz Films' first feature movie. Wiz Films is actually the production wing of Wizcraft, the organisers of International Indian Film Awards (IIFA). "One of the films that we are producing will feature Sonakshi Sinha, Aditya Roy Kapur and Diljit Dosanjh. The film will have elements of romance, comedy and drama. It should go on floors this year," Sabbas Joseph, the Founder-Director of Wizcraft, was quoted by PTI as saying. The yet-untitled film is just one of the many projects that the production house is currently working on.

"This film is being produced by Vashu Bhagnani and Wiz Films. A formal announcement will be made soon. There are other film projects that we are working on. For the moment we can't talk about any of these projects as we are working on them; they are in the pipeline," Mr Joseph added, reported PTI.

Sonakshi, Aditya and Diljit's film will reportedly feature several Bollywood celebrities in special appearances and cameos. The PTI report also states that certain parts of the film will also be shot at the much-awaited IIFA Awards, which is scheduled to be held in New York in July.

Promoted
Listen to the latest songs, only on JioSaavn.com
Sonakshi Sinha will next be seen in Ittefaq, co-starring Sidharth Malhotra while Diljit will play a Punjabi superhero in Super Singh. Meanwhile, OK Jaanu remains Aditya Roy Kapur's last film.