Adani, Targeted By Greta Thunberg, Undeterred By Protests For Australia 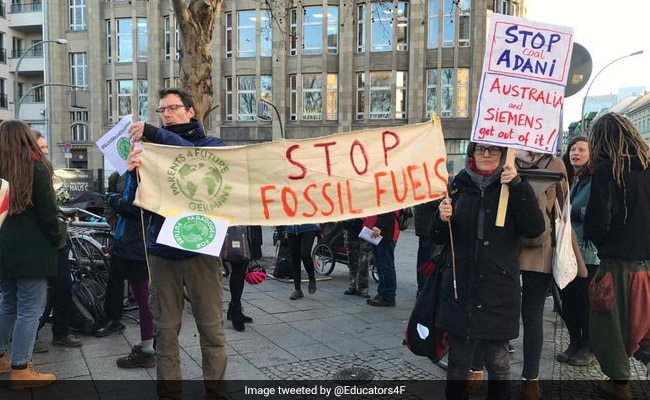 Adani conglomerate said it won't let protests dissuade it from completing the project.

The Adani conglomerate coming under increasing pressure over its controversial coal mine in Australia said it won't let protests dissuade it from completing the project.

The group, controlled by Indian billionaire Gautam Adani, is responding to an uptick in scrutiny over the Carmichael development, including from high-profile teen activist Greta Thunberg. While the mine and rail project has been a target of environmentalists since it was proposed in 2010, its facing fresh global attention as Australia suffers unprecedented bushfires and as Germany's Siemens AG comes under attack for its contract to provide rail signaling systems.

The Munich-based company said Sunday that it will honor that commitment, defying demands of demonstrators in Germany.

Increasingly dire warnings over climate change and more extreme weather have sparked greater calls for action, with particular focus on projects such as Adani Group's Carmichael thermal coal project, which will boost the global supply of the most carbon-intensive fossil fuel.

"With construction of the Carmichael project well and truly underway, we have repeatedly demonstrated that we will not be intimidated or deterred from delivering on our promises," the Adani Group said in a statement today. Those promises, it said, include to "people in developing nations who desperately need affordable energy to help lift them out of poverty."

The pressure on the German engineering giant piled up as Australia, the world's driest inhabited continent, faces a crisis of unprecedented scale. More than 10 million hectares (25 million acres) -- larger than the US state of Indiana -- have been destroyed by the raging fires. Distressing images of injured or dead native animals, including koalas and kangaroos, have been flooding social media streams, while the human death toll stands at around 28.

Greta Thunberg, who has inspired other protesters, told her Twitter followers on January 11 to help push Siemens to make the "only right decision."

"It seems that Siemens Deutschland have the power to stop, delay or at least interrupt the building of the huge Adani coal mine in Australia. On Monday they will announce their decision. Please help pushing them to make the only right decision," she tweeted.

It seems that @SiemensDE have the power to stop, delay or at least interrupt the building of the huge Adani coal mine in Australia. On Monday they will announce their decision. Please help pushing them to make the only right decision. #StopAdani

"While I do have a lot of empathy for environmental matters, I do need to balance different interests of different stakeholders," Siemens Chief Executive Officer Joe Kaeser said in a statement, affirming his decision to go ahead with the Adani contract.

Australia has also pushed back against calls from some of its neighbors to ditch its commitment to coal mining to help combat climate change, saying those countries need to respect the country's reliance on the industry.

Coal ranks as Australia's second-biggest commodity export, and became a battleground issue in elections last May, exposing divisions caused by Adani's Carmichael project. Australia Prime Minister Scott Morrison, who leads the ruling coalition, once brandished a lump of coal in parliament to show his support for the industry.

In a July interview, fresh from winning the project, Mr Adani said his group entered Australia with goals -- contributing to energy security in India and creating job opportunities for Australians. Doubling down on coal, he said India's development is linked to the availability of more power and the low-cost commodity will play a big role. The tycoon's net worth is almost $11 billion, according to the Bloomberg Billionaires Index.

In a December 18 letter to Kaeser, Australia's Resources Minister Matt Canavan urged Siemens not to be intimidated by the "noisy, anti-coal minority."

"If the protesters achieve their goals of ending coal mining by bullying companies into submission, the result would be millions more people without a home, without access to electricity and without as much hope as they otherwise could have," the Resources Minister said in the letter.