Action Against 7 UP Cops For Supporting Apple Employee's Killers 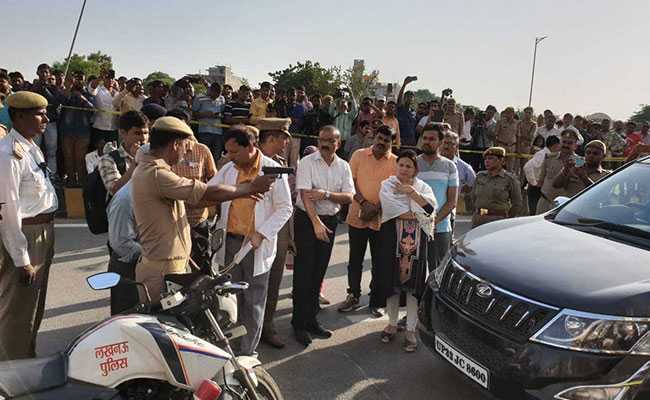 Three police officers have been removed, four constables suspended and two ex-policemen arrested as the Uttar Pradesh police cracked down on social media protests from within the force over the action taken against two constables who allegedly shot dead an Apple executive last week.

Pictures on social media show police personnel wearing black armbands in support of their colleagues who were arrested after the tech company executive was shot dead when he refused to stop his car for checking.

Incharges of Naka, Gudamba and Aliganj police stations in the state capital were removed and three constables posted there suspended on Friday. A departmental probe is on, DIG (Law and Order) Praveen Kumar told reporters here.

The photographs of constables of the three police stations went viral on social media, after which officers swung into action. They, however, did not confirm whether the photographs were current or old.

On Thursday, former constables, Brijendra Yadav and Avinash Pathak, dismissed from service earlier in different cases, have been arrested from Varanasi and Mirzapur, while a policeman, Sarvesh Chowdhury, posted in Raebareli has been suspended over the same issue, the police said.

An FIR has also been registered against Sarvesh Chowdhury for posting an 11-minute video in which he purportedly claims that he had offered and has been collecting money for the two constables accused in the killing of the Apple executive. He is also seen taking swipes  at political leaders and top police officials.

Officials said a probe has been ordered into reports that constables were posting their pictures with black armbands on in support of their two accused colleagues, and that action would be taken against those found involved in such acts.

Vivek Tiwari, the Apple executive, was shot dead early on September 29 when he allegedly refused to stop his car for checking in Lucknow's posh Gomti Nagar neighbourhood.

Two constables, Prashant Chowdhury and Sandeep Kumar, were arrested after an FIR was lodged on basis of a complaint by Mr Tiwari's colleague who was travelling with him.

Some people claiming to be batchmates and sympathisers of Prashant Chowdhury and Sandeep Kumar are seen campaigning for them on social media, seeking donations to help them.

"An FIR has been registered at Hazratganj police station here on Thursday against unnamed people under the Police (Incitement to Disaffection) Act, and cyber teams are looking at such posts to take the case to a logical end," a senior police official said here.

The Act provides a maximum punishment of six months.

"Rumours are being spread on social media... We have taken the matter seriously and surveillance is going on to track such people. It has come to the fore that some constables terminated from service are involved in it," the DIG said.

An Uttar Pradesh police spokesperson said, "It has come to our notice that constables are tying black ribbons and posting such pictures on social media."

The posts are being examined, he said, adding in the last two days, investigating officers have come across instances where morphed or old pictures were posted on social media.

Clarifying the situation, the DIG said, "Some people posing as policemen and anti-social elements are involved in it. We will take strict action."

When asked about the issue, Vivek Tiwari's wife Kalpana said, "My innocent husband was killed, I want justice for him. I am not against the police. This (campaign in support of accused constables, if any) should not be held. Senior officers should take cognisance of it and take action."

About reports that constables were collecting money to help their arrested colleagues and other such items flooded the social media, DGP OP Singh had on Thursday said, "We have alerted our officers and a close watch is being kept on social media. The officers have been asked to interact with constables and tell them about the incident and explain them circumstances under which they were arrested and dismissed."