No More Trees To Be Cut In Mumbai's Aarey Till October 21, Says Top Court

Aarey Mumbai: The Supreme Court took up the case despite Dussehra holidays after a group of law students wrote to Chief Justice of India Ranjan Gogoi, asking for his intervention

There will be no cutting of trees at Mumbai's Aarey till October 21, the Supreme Court said in an emergency hearing today as it took up a petition against the government's plan to clear acres of green for a metro car shed. The court ruling, which included status quo to be maintained at the site, came after the Maharashtra government said it had already cut down trees that it needed to for its plan to clear 33 hectares of Aarey land for the construction of the depot.

The state government interpreted the court order as "status quo" only for the cutting of trees; it said construction can be carried out at the area cleared at Aarey for a Metro car-shed. "There is no status quo on construction on the 33 hectares of Aarey land that has been cleared," said Maharashtra government lawyer Nishant Katneshwarkar.

The Supreme Court took up the case despite Dussehra holidays after a group of law students wrote to Chief Justice of India Ranjan Gogoi, asking him to urgently stop the cutting of trees at Aarey.

The students wrote to the Chief Justice when Mumbai civic authorities took a Bombay High Court order as sanction to start removing over 2,000 trees marked for clearance late on Friday. Activists allege that that the officials had violated a 15-day window following the court order before any action could be taken.

The High Court had refused to declare Aarey a forest area and dismissed petitions against cutting of over 2,600 trees for the Metro. 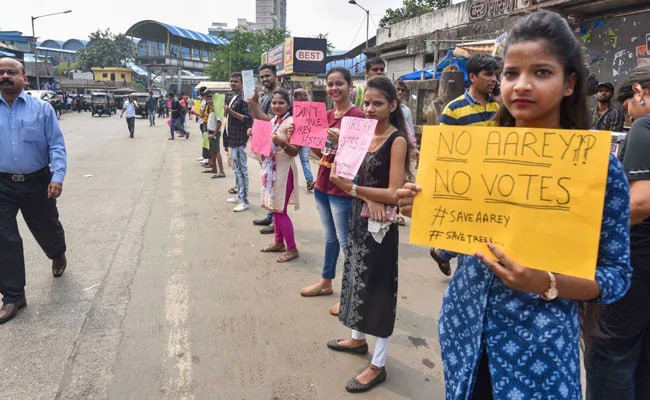 On Sunday, 29 activists arrested during protests on Friday night were released on bail.

On Friday night, activists protested loudly as the trees came down; the police used batons on those who tried to hug the trees to stop the action. Activists claim around 2,000 trees were cut that night.

"What is required to be cut has been cut. No further cutting of trees is required," Solicitor General Tushar Mehta told the court on behalf of the Maharashtra government.

The students' letter to the Chief Justice, which was treated as a petition by the court, said Aarey had been deemed an "unclassified forest" by the state government and the cutting of trees was illegal.

During the arguments, one of the two judges, Justice Arun Mishra, questioned: "Tell us how many saplings you planted. How have they grown? What's the status of your forests?"

He was responding to the Maharashtra government's statement that over 20,000 trees had been planted to make up for the loss of Aarey's trees. "All of us would have been concerned with the environment but see that 20,900 trees have also been planted," said Tushar Mehta.

The Solicitor General said the survival rate was 95 per cent.

The court also asked whether all activists arrested during the protests on the weekend had been released. On Sunday, 29 activists were released on bail.

Protesters have been trying for two years to stop the cutting of trees for the construction of a car shed for the Mumbai Metro at Aarey, a green patch in north Mumbai that activists say has shrunk over the years because of development projects.

Uddhav Thackeray, chief of the ruling BJP's coalition partner Shiv Sena, and his son, Aaditya, have supported the activists.

The Aarey protests have also divided the film fraternity. Several stars have backed the protests but actors Amitabh Bachchan and Akshay Kumar have come out in support of the metro project.

Aarey Colony, a green belt in suburban Goregaon which has more than five lakh trees, together with Sanjay Gandhi National Park, is known as the green lung of Mumbai. Located next to Sanjay Gandhi National Park, home to hundreds of species of birds and animals, Aarey was set up mainly to improve the production of dairy products. The protests against cutting of trees also sparked Twitter campaigns and online petitions with the hashtags #AareyChipko #SaveAarey.