Sources say AAP was concerned that the BJP was targeting her, telling voters that she is a Christian. 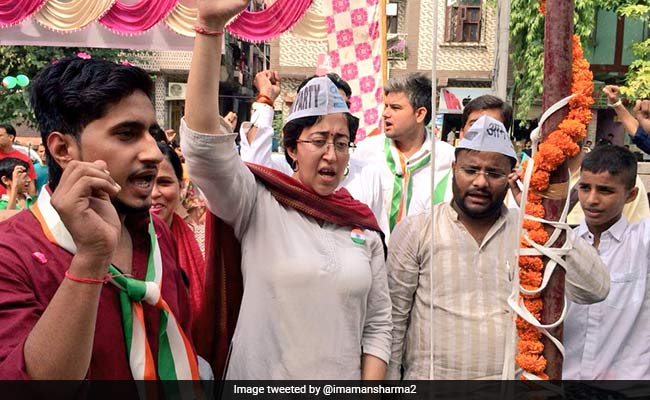 AAP wants Atishi Marlena to contest the east Delhi constituency in the 2019 elections.

The Aam Aadmi Party (AAP)'s Atishi Marlena, chosen by the party as a candidate for the 2019 national election, has dropped her last name. AAP has denied reports that it forced her to change her name because it was "Christian-sounding".

Atishi Marlena is likely to be AAP's candidate from the east Delhi constituency in the national polls next year. Sources say AAP was concerned that the BJP was targeting her, telling voters that she is a Christian.

So Atishi's last name is no more in posters, banners, hoardings and poll pamphlets.

Her Twitter handle has changed from @Atishimarlena to @AtishiAAP. Her name has been amended on the AAP website.

"The BJP started spreading rumours about Atishi even though she is from a Punjabi Rajput family," said an AAP leader.

The leader added that "Marlena" is not really a surname; Atishi's father Vijay Singh, a professor at the Delhi University, had come up with the name by combining "Marx" and "Lenin".

On record, AAP leader Akshay Marathe emphatically denied in a tweet that the party had asked Atishi to ditch her surname.

A progressive politician like @AtishiAAP who DOES NOT use her caste name 'Singh' to ask for votes, is being targeted for using only Atishi without 'Marlena'

Our discourse is around education and healthcare, not on identities of caste and religion.

Atishi worked as Delhi Education Minister Manish Sisodia's adviser till April, when she was asked to take charge of the east Delhi constituency. She was involved in drafting the manifesto of AAP in the 2015 Delhi election.

She is the first candidate to be named as candidate by Arvind Kejriwal's party for next year's general election. She has studied at the Oxford University and Delhi's St Stephens.