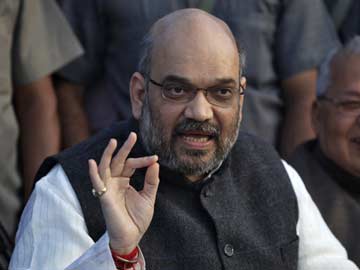 With Mr Shah taking over as the new BJP chief, the party, according to sources, is also likely to expand its central parliamentary board, the topmost decision-making body, to accommodate him. The CPB presently has 12 members.

The over two-hour-long deliberations were held at the residence of former party president Nitin Gadkari and Mr Shah's predecessor Rajnath Singh was also present.

The BJP has to finalise a new team for Mr Shah, who took over 15 days ago and immediately got down to building strategy for assembly elections in four states later this year. The BJP hopes to extend in these state elections, its spectacular performance in the general elections.

It also has to decide if it would be more prudent for it to form government in Delhi or push for fresh elections.

The RSS, which has in recent years sought to play a more involved role in the BJP's affairs, has backed the appointment as BJP chief of Amit Shah - Prime Minister Narendra Modi's closest aide and the man he reportedly wanted in that post - to ensure that the party and the government it leads at the Centre have the best coordination. The party may, for the first time, appoint a general secretary who would be in charge of coordination.

In doing so the Sangh put aside its discomfiture over an unprecedented situation where the party president and the Prime Minister are both from the same state- Gujarat.

Promoted
Listen to the latest songs, only on JioSaavn.com
The RSS reportedly does not want to repeat what it sees as mistakes made during the Vajpayee regime a decade ago; it believes that the gap between the organisation, the political party and the government had widened then. It also wants to ensure that the BJP being in power does not mean a dilution of the Sangh's core ideology.

Towards that it has recently deputed two senior RSS leaders, including spokesman Ram Madhav, to join the BJP. An organisational role for Mr Madhav, the most prominent RSS leader to join active politics in recent days, was reportedly being discussed at today's meeting.