A Museum For Author George Orwell in Bihar's Motihari 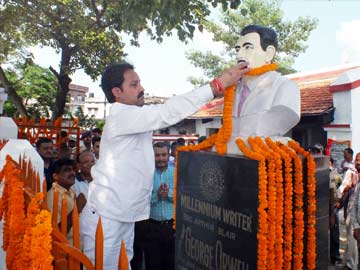 Bust of author George Orwell garlanded at his birthplace in Motihari, Bihar on August 28, 2014 (AFP photo)

Motihari, Bihar: India on Thursday began work to restore the dilapidated house where "Animal Farm" and "1984" author George Orwell was born and turn it into a museum.

Orwell was born Eric Arthur Blair on June 25, 1903 in Motihari, a tiny town in Bihar, near the border with Nepal.

His father, Richard W. Blair, worked at the time as an agent in the opium department of the Indian Civil Service during the height of British rule over the subcontinent.

The family's simple white colonial bungalow had been left to fall into ruins until the Bihar authorities decided to renovate it in a 6 million rupees (60 lakhs) project.

"Finally, work on the development of Orwell's birthplace in Bihar's Motihari town began," said Bihar's Art and Culture Minister Vinay Bihari, adding he hoped it would be a tourist draw.

The Bihar government announced a makeover of the site in 2009, but nothing was done.

Last year, local officials caused consternation among Orwell fans when they said the land attached to the house would be developed in memory of  Mahatma Gandhi.

But on Thursday it emerged that the Gandhi memorial will sit alongside the Orwell museum.

Orwell, who lived in Motihari for a year as a child before leaving for England, wrote admiringly of Gandhi in his 1949 essay "Reflections on Gandhi".

But he also criticised his famously spartan lifestyle.

"No doubt alcohol, tobacco and so forth are things that a saint must avoid, but sainthood is also a thing that human beings must avoid," Orwell wrote.