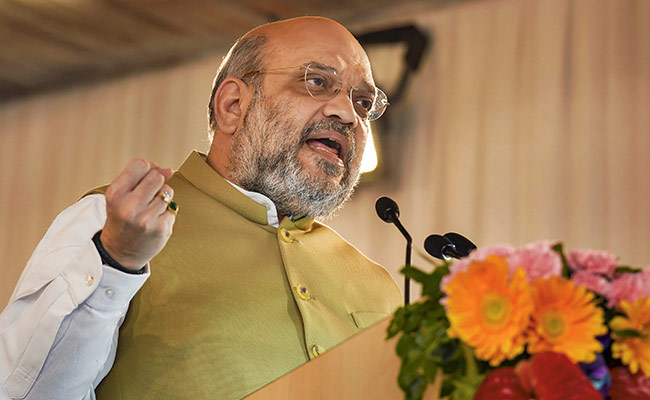 "The A, B, C, D of Samajwadi Party is itself all wrong," Amit Shah said during an election rally (File)

Addressing a rally in UP's Hardoi, the BJP leader also alleged that the SP, BSP and the Congress made numerous efforts to stop the construction of the Ram temple at Ayodhya and asserted that they "will not succeed even if they unleash their full force".

He took a swipe at the Samajwadi Party over the income tax raids against a Kanpur-based perfume trader allegedly linked to it.

"The Bharatiya Janata Party has wiped out this A, B, C, D," the former BJP president said at the Jan Vishvas Yatra.

Hardoi has been a stronghold of the Samajwadi Party and the family of Naresh Chandra Agarwal, who joined the BJP in 2018.

"A few days ago, there were income tax raids. Why was (SP chief) Akhilesh having an upset stomach over raids, and he said that the raids were done with political malice," Amit Shah said.

"Can anyone tell me whose Rs 250 crore were found at the place of the person making Samajwadi Attar? Today, they (SP) are unable to give an answer," Amit Shah said.

In multiple raids by the Income Tax department and the Central Board of Indirect Taxes and Customs, were seized from perfume trader Peeyush Jain's around Rs 257 crore in cash, 25 kg of gold and 250 kg of silver house in Kanpur as well as from his house and factory in Kannauj.

The Finance Ministry on Monday said it was the "biggest ever seizure of cash" by an enforcement agency.

BJP leaders have sought to link the perfume trader with the Samajwadi Party claiming he had launched the 'Samajwadi Attar (perfume)' with Akhilesh Yadav's support recently.

However, Samajwadi Party president Akhilesh Yadav on Tuesday categorically denied any links between his party and Peeyush Jain, and mockingly said the BJP got "its own businessman" raided "by mistake".

"By mistake, the BJP got its own businessman raided. Instead of SP leader Pushpraj Jain, it got Peeyush Jain raided," Mr Yadav told reporters in Unnao. Hitting out at the political rivals, Mr Shah said, "The SP, BSP and the Congress had made numerous efforts to stop the construction of the temple of Lord Ram. Today, I want to tell them that they can unleash their full force if they want. In a few months, a grand temple of Lord Ram touching the sky will be built."

He accused the Samajwadi Party and the BSP of neglecting development when in power.

"When the SP came (to power), development of only one caste took place, while the development of another caste took place when the BSP came (to power). When Modijee came, then 'sabkaa saath-sabkaa vikaas' is taking place," the Home Minister said Shah also spoke on the law and order situation prevalent in the state before the BJP came to power in 2017.

"There was a time when mafia would rule. Mothers and sisters used to reach their homes before sunset. Today, under Yogiji's rule, all the mafia have been wiped out (from UP)," the BJP leader said.

Currently, Hardoi is represented in the UP Legislative Assembly by Nitin Agarwal (son of Naresh Chandra Agarwal) who is an SP MLA and was elected Deputy Speaker of the UP Assembly with the BJP's support.