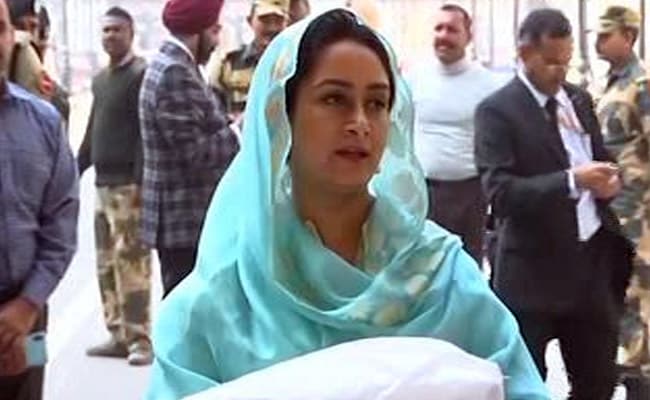 Harsimrat Kaur Badal is confident of winning the elections in Bathinda, which is a SAD stronghold.

On May 19, Punjab will witness one of its toughest electoral contests in Bathinda as Union Minister Harsimrat Kaur Badal strives to retain the Lok Sabha constituency for the third time in a row by repulsing a multi-cornered attack from rival candidates.

Pitted against Ms Kaur are the Congress' Amarinder Singh Raja Warring, Aam Aadmi Party's Baljinder Kaur and Punjab Democratic Alliance's Sukhpal Khaira. She had defeated Raninder Singh, son of Chief Minister Amarinder Singh, by over one lakh votes in 2009 and repeated the feat (albeit with a smaller margin of 19,395 votes) against Manpreet Badal in 2014.

However, things don't look as rosy for Ms Kaur this time. She is fighting an anti-incumbency sentiment that has gathered strength over the last 10 years at a time when her party doesn't even hold the reins to Punjab. The Shiromani Akali Dal (SAD) was crushed in the 2017 assembly elections, with several factors - including public anger over multiple incidents of sacrilege in 2015 and the rising suicide rate among farmers - contributing to its downfall.

The SAD leader's election campaign now hinges on criticising the Amarinder Singh government's alleged failure to deliver on promises made before the assembly elections. "Captain Amarinder took a false oath that he would end the drug menace and ensure employment. He also stopped multiple welfare schemes launched by us. Although he promised complete loan waivers, farmers are committing suicide," she said in one of her speeches. "The Congress has only cheated people. Nothing has changed in the last two years."

On the other hand, alliance partner BJP is seeking votes by trying evoking nationalist sentiments and praising the valour of defence forces.

But doesn't the sight of people protesting at her election rallies make for a jarring effect? Ms Kaur sees a Congress conspiracy behind the whole thing. "Those are opposition-sponsored protesters who want to derail my campaign. But Congress candidate Amarinder Singh Raja Warring is a political novice and nobody even knows him in the constituency," she says, adding that Sukhbir Singh Badal - her husband and party chief - is yet to campaign for her.

Mr Warring had launched his election campaign by staying at the residence of a Dalit family for a day. Portraying himself as a commoner fighting against the mighty Badals, he repeatedly refers to his humble origins as well as how he entered politics by winning twice from an assembly constituency that happens to be the Badals' stronghold. "I am an orphan who lost his parents while still a kid. I don't have wealth and property like Harsimrat Kaur Badal. But they must be punished for their involvement in the desecration of the Guru Granth Sahib," he says in a speech delivered in the Mansa assembly constituency.

Mr Warring threw his hat in the ring at a time when most senior leaders had refused to contest against Ms Kaur in an established Badal stronghold. "I'm no pushover, and I'm getting a good response," he maintains, putting on a brave face.

With two weeks to go for the elections, no single party seems to have a clear edge over the other in Bathinda. In all probability, the victory margin this time will be much narrower than in previous polls.