"Fight For Justice Not Over," Say Parents On Nirbhaya Death Anniversary

"My fight for justice isn't over with the hanging of my daughter's convicts and will continue for getting justice for other rape victims as well," Nirbhaya's mother Asha Devi said. 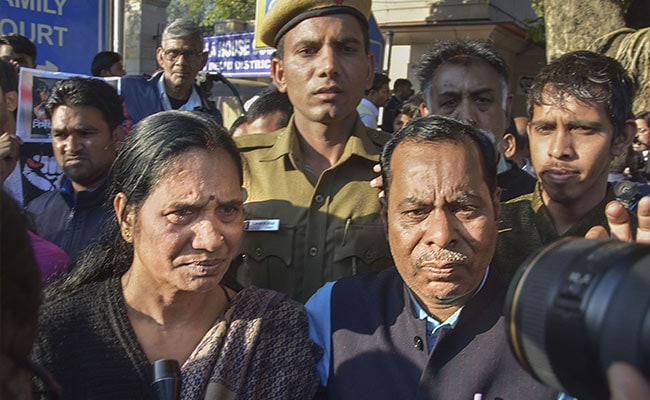 Eight years after a harrowing incident changed her life and the uphill battle that followed to ensure that her daughter's culprits were punished, Nirbhaya's mother Asha Devi has bravely resolved to fight for bringing justice to survivors and victims of sexual assault.

"My fight for justice isn't over with the hanging of my daughter's convicts and will continue for getting justice for other rape victims as well," she said.

On the intervening night of December 16 and 17, 2012, a 23-year-old physiotherapy intern, who later came to be known as Nirbhaya -- the fearless one, was raped and brutally assaulted in a moving bus in south Delhi by six men including a minor before being thrown out on the road in a savagely injured state.

She died a few days later in a Singapore hospital where she was shifted for life-saving treatment.

Four of the six accused were convicted and hanged on March 20 this year. One of them, Ram Singh, allegedly committed suicide in the Tihar Jail days after the trial began in the case and another, a juvenile, was released in 2015 after spending three years in a correctional home.

"My daughter may have got justice but the struggle killed us everyday. Every time the hearing was posted further, a part of me broke down but I gathered courage," Ms Devi said.

"It took eight years to get justice, imagine what happens to those victims where cases are not highlighted or there aren't enough evidences. My fight will continue for them," she said on eighth anniversary of the gruesome gangrape that led to widespread outrage and massive protests by thousands of people across the country.

Ms Devi said the entire nation followed her daughter's case and is witness to the tactics the defence lawyers used and the kind of immunity the accused got for a very long time "in name of human rights".

"I pledge to keep fighting for swift justice delivery to rape victims," she said.

After raping and brutalising her, they dumped her on the road and left for dead on the cold winter night. Her male friend who was with her in the bus was also severely beaten and thrown out along with her.

Nirbhaya's father, who also joined an online petition which was started by NGOs Save the Children and Yuva to mark the eighth anniversary of the gangrape case, said "the fight is not over yet".

"You have probably never heard from me. Today, I felt it was necessary for you to hear my voice. My name is Badrinath Singh. But since the night of 16th December, 2012, I am known as "Nirbhaya's father". This is how I will be known for the rest of my life," he said in a statement on Tuesday.

Eight years ago, when "my daughter was snatched away from us in the most brutal way, crowds led by women came out on the streets" and they made "my family's fight their fight for justice", he said.

"I thought this case would change us as a country for good. But when I turn on the news, there is a new case of another daughter being brutally assaulted every day. Nothing has changed," Nirbhaya's father said.