West Bengal: The incident took place in the evening when hundreds of people gathered on the banks of the Mal river to participate in the immersion ceremony. 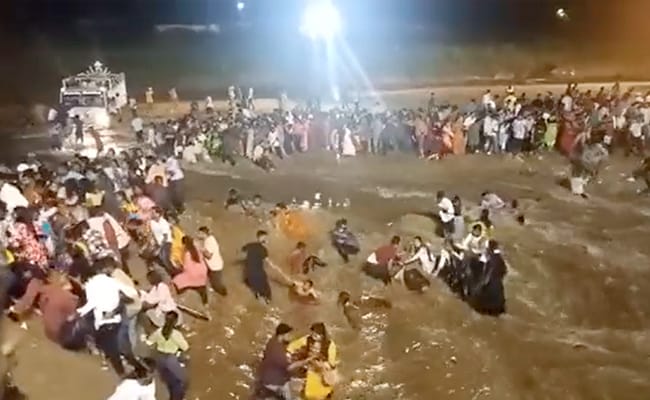 8 bodies have been recovered and around 50 people have rescued so far, police said.

At least eight people drowned and several others went missing after they were swept away in the Mal river due to flash floods during idol immersion on Vijayadashami in West Bengal's Jalpaiguri, a senior official said. Four of the dead are women.

The incident took place around 8.30 pm on Wednesday when hundreds of people gathered on the banks of the Mal river to participate in the immersion ceremony.

"All of a sudden, flash floods struck and people were swept away. So far, eight bodies have been recovered and we have rescued around 50 people," Jalpaiguri District Magistrate Moumita Godara told PTI.

She said 13 people, who received minor injuries, were admitted to a nearby hospital.

"The search and rescue operations are underway and being carried out by teams of the NDRF, SDRF, police and local administration. The search operations have started downstream," she said.

State Backward Class Welfare Minister Bulu Chik Baraik, who is the MLA from the Mal Assembly constituency, feared that the death count may increase.

Mr Baraik and senior Trinamool leaders rushed to the spot to oversee the relief and rescue operations.

Leader of the Opposition in the West Bengal Assembly Suvendu Adhikari requested the state administration to step up the rescue efforts.

"Saddening news coming from Jalpaiguri as flash flood in Mal river during Durga Puja immersion swept away many people. Few deaths have been reported till now. I request the DM of Jalpaiguri & @chief_west to urgently step up rescue efforts & provide assistance to those in distress," he tweeted.