Five people, including the bus driver, died on the spot, two others died on the way to the hospital. Nine people were seriously injured and were hospitalised, the police said. 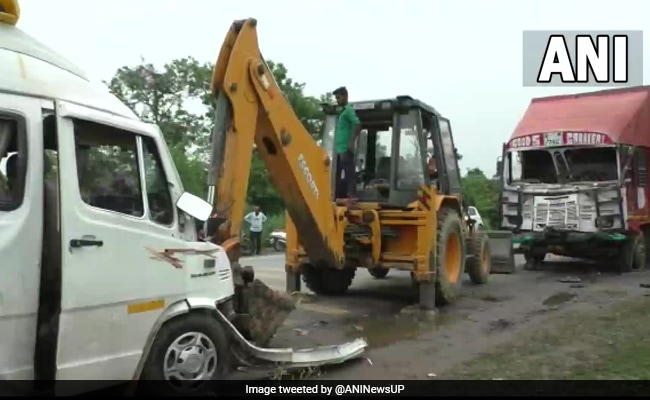 Karnataka Chief Minister Basavaraj Bommai spoke to some of the injured.

Seven people, including three women, were killed and nine grievously injured when a tourist bus collided with a truck on the Bahraich-Lakhimpur highway in Uttar Pradesh's Bahraich on Sunday, police said.

The bus carrying 16 people from Karnataka was going to Ayodhya when the accident took place at Naniha market in the Motipur area as it entered the opposite lane, Additional Superintendent of Police Ashok Kumar told PTI.

While five people, including the bus driver, died on the spot, two others succumbed to their injuries on the way to the hospital. Nine people were seriously injured and were hospitalised, he said.

The victims were identified after one of the injured passengers, Bhoomika (16), connected the police officials with their family members through a video call and by sharing photos.

The truck driver managed to flee after the accident. A probe into the matter is on, the ASP said.

Chief Minister Yogi Adityanath condoled the deaths and directed the concerned officials to ensure the injured get good medical treatment.

Karnataka Chief Minister Basavaraj Bommai spoke to his Uttar Pradesh counterpart on the phone, and enquired about the accident and medical care being provided to the injured, said District Magistrate Dinesh Chandra Singh.

Mr Bommai also spoke to some of the injured, he said