61 Child Deaths In 72 Hours At Gorakhpur Hospital, 'Number May Go Up'

In the last 24 hours, 19 children have died of whom four died of encephalitis at the Baba Raghav Das Medical College just three weeks after 70 children lost their lives due to the alleged shortage of oxygen at the same facility 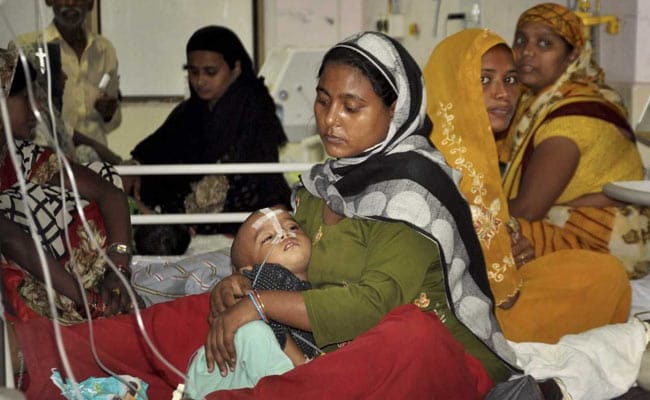 Gorakhpur Child Deaths: At least 70 children lost their lives earlier this month at this hospital.

Gorakhpur: Sixty one children, mostly newborns, have died in the last 72 hours at the hospital in Gorakhpur where 70 infant deaths were reported three weeks ago, from various causes including oxygen shortage.

In the last 24 hours, 19 children have died at the Baba Raghav Das (BRD) Medical College, four of encephalitis. The rest were babies who died in the hospital's neo-natal intensive care unit.

The hospital, the biggest in Chief Minister Yogi Adityanath's home base Gorakhpur, sees hundreds of patients from neighbouring Bihar, other districts of Uttar Pradesh and even Nepal.

A doctor at the encephalitis ward said the situation may worsen because of rain and floods. "We get patients from eastern Uttar Pradesh, Nepal and Bihar -- states that are reeling under the effects of flood leading to a jump in the number of children coming to the hospital," he said.

According to hospital records, this year till Monday at least 1,250 patients have died in the encephalitis and newborns' ward. Many of the patients told NDTV that it is because of inadequate and ill-equipped medical facilities in their hometown that they have to travel to BRD Medical College in Gorakhpur.

Yesterday, the former principal, Dr Rajeev Mishra, and his wife Dr Purnima Shukla were arrested by the UP Special Task force from Kanpur over the child deaths earlier this month.

Promoted
Listen to the latest songs, only on JioSaavn.com
Over 70 children died at the biggest government hospital in Gorakhpur - the home base of UP Chief Minister Yogi Adityanath - of reasons that include encephalitis and shortage of oxygen supply. The tragedy at the Gorakhpur hospital had prompted a public outcry. The chief minister formed a committee to probe the deaths and on August 13, even asked journalists to visit the ICU wards in a bid to ease pressure on the authorities over allegations that they were not being transparent with the matter.