60 Children, Including Newborns Die In 5 Days At Uttar Pradesh Hospital

The Baba Raghav Das Medical College is the biggest hospital in Gorakhpur district that has been Uttar Pradesh Chief Minister Yogi Adityanath's parliamentary constituency for years.

Baba Raghav Das Medical College in UP's Gorakhpur is the biggest hospital in the district.

Lucknow: Thirty children, many of them newborns, have died in the last 48 hours at a hospital in Uttar Pradesh's Gorakhpur district, 60 in the last five days. The UP government has ordered an investigation into the large number of child deaths, but denied reports linking them to a disruption in the supply of oxygen at the hospital.

Seven children have died at the state-run Baba Raghav Das Medical College in the last one day. The maximum, 23 died on August 10, the same day that the firm which supplies oxygen to the hospital stopped doing so because previous bills had not been paid. But the UP government has in multiple statements said they are not linked, as the hospital had access to oxygen from other places.

"There have been no deaths due to lack of oxygen supply," said UP's medical education Minister Ashutosh Tondon, adding that the district magistrate of Gorakhpur has ordered an investigation and "the report will be out within 24 hours".  The Baba Raghav Das Medical College is the largest hospital in Gorakhpur, which has been Uttar Pradesh Chief Minister Yogi Adityanath's parliamentary constituency for the last 19 years.

"Those responsible will not be spared," State Health Minister Siddharth Nath Singh said adding, "Chief Minister visited the BMD hospital on August 9, doctors there did not make him aware about oxygen shortage." Chief Minister Yogi Adityanath has this morning ordered an inquiry into the tragedy. 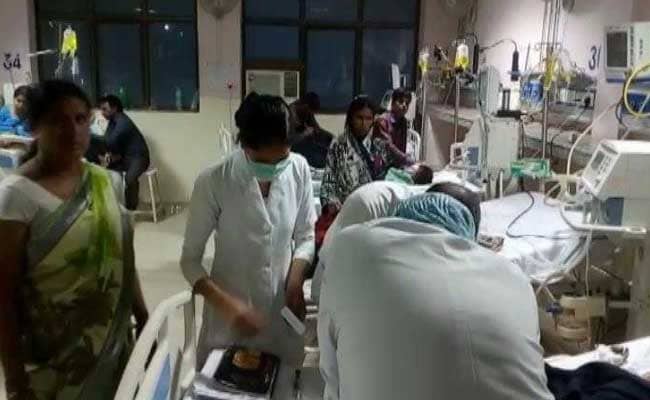 District Magistrate Rajeev Rautela on Friday told reporters that, "medical college officials told us that there was alternative oxygen supply, therefore the charge of lack of oxygen supply can be ruled out." The hospital, Mr Rautela said, owed Rs 70 lakh to the regular vendor, of which it had already paid Rs 35 lakh. "We also got in touch with the vendor in Lucknow, he confirmed that there was a payment issue and the transaction was pending. We requested him not to disrupt the oxygen supply," he said.

BJP lawmaker from UP's Bansgaon, Kamlesh Paswan, who is from Gorakhpur and has been at the hospital for several hours today, too asserted that there was no connection between the deaths and disruption in supply of oxygen cylinders.

"An average 8-10 patients die every day in this hospital, which gets a large number of encephalitis patients," Mr Paswan said.  Thousands have died since the first case of encephalitis was discovered in the 1970s in Gorakhpur.

The Congress and the Samajwadi Party have sought the resignation of UP's health minister. Former UP Chief Minister Akhilesh Yadav called for strong action. "Families of the dead were sent off with the bodies, they did not even do autopsies... extremely unfortunate," he alleged in a tweet.

Promoted
Listen to the latest songs, only on JioSaavn.com
"I am pained beyond words by the tragic deaths of 30 children in Gorakhpur. My heart goes out to their families," said Congress President Sonia Gandhi this morning.

Mrs Gandhi's son and deputy Rahul Gandhi had on Friday tweeted, "Deeply pained. My thoughts are with the families of the victims. BJP government is responsible and should punish the negligent who caused this tragedy."