The militants of the National Democratic Front of Bodoland (Songbijit) were arrested in a joint operation of the army and the Assam Police. 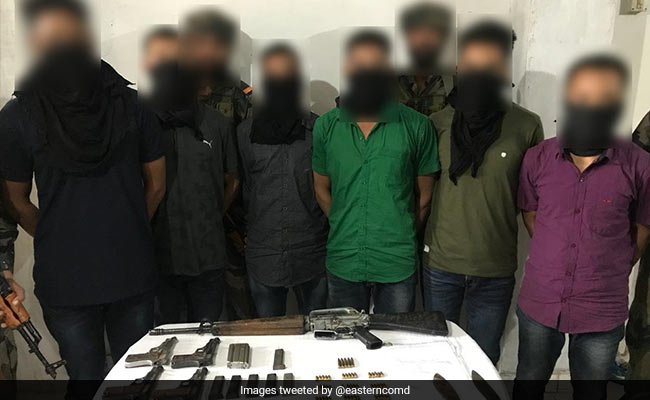 NDFB(S) militants were arrested with a cache of weapons in Assamn's Kokrajhar.

Six members of the National Democratic Front of Bodoland (Songbijit), including the outfit's self-styled "cultural secretary", were arrested and a cache of arms recovered from their hideout during a raid in Assam's Kokrajhar district on Tuesday.

The arrests were made during a joint operation by the Indian Army and the Assam Police at Ripu Reserve Forest in the district, a statement from the army said.

Troops of the Sikh Light Infantry regiment ambushed group of NDFB(S) militants in Raimana area near Akshaiguri on the intervening night of Monday and Tuesday. The soldiers had information about the presence of the militants and were alerted when they noticed six individuals moving suspiciously in the area, the statement said.

On being challenged, the militants tried to escape into the jungles, aided by the darkness, but the troops reacted swiftly and caught the militants, it said.

They confessed to being NDFB(S) militants trained in Myanmar, the army said.

The statement said the group also revealed the location of a temporary camp close to the spot where they were arrested.

While three of the militants are from Kokrajhar district, the remaining three belong to Chirang district, it said, adding the apprehended persons were a handful of the NDFB(S) militants active in the Bodoland Territorial Area Districts (BTAD) area of Assam.

The statement said the army had been trying to catch these militants for over three months, adding the arrests was a major setback for the outfit's activities in Kokrajhar district.

Because of tough living conditions, sustained pressure by the security forces and the lack of support from the locals, most of the NDFB(S) cadres are disillusioned and demoralised, it said.

The statement said the security forces will continue exerting pressure through sustained operations till all the NDFB(S) militants are neutralised.