6 aircraft, 37 helicopters and more on PM's $ 5 billion shopping list in US 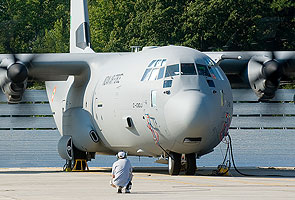 New Delhi: India is set to buy American defence equipment worth five billion US dollars and Prime Minister Manmohan Singh, who left for the United States today, is carrying a long shopping list.

Among the hardware that India is looking to purchase are six additional C-130 J Hercules Medium Lift Aircraft, 22 Apache Attack Helicopters, 15 Chinook Heavy Lift Helicopters and about 140 M-777 ultra-light towed Howitzers. Contracts for all of these are expected to be signed before the current financial year is over.

The US-made Apache Attack helicopters will replace India's ageing fleet of Russian-made M-35 helicopters and will cost India about $1.4 billion.

Although the US lost the $15 billion tender for the supply of Medium Multi-Role Combat Aircraft or MMRC to France in 2011, it has in the last decade sold weapons systems worth $8 billion to India and is poised to edge out Russia and Israel as New Delhi's biggest defence equipment suppliers.

The US has recently proposed co-producing aircraft like the C-130 J Hercules and the number of joint military exercises that India has carried out with the US in the last 10 years too now exceeds those with traditional defence partners like Russia, UK and France.

It was perhaps this apparent closeness that provoked Victor Komaradin, who headed a Russian delegation at Aero-India 2013, to observe that "although Russia has virtually created Indian Defence industries in the 1960's and 70's, little attention is being given to the Russian contribution in building India's defence capabilities."

The big purchase order also underscores the fact that despite claiming to be a regional power, India still imports about 70 per cent of all its weapons and equipment.

Promoted
Listen to the latest songs, only on JioSaavn.com
According to a March 2013 report of the Stockholm International Peace Research Institute - an independent research body that specialises in conflict and arms sales - New Delhi replaced Beijing as the world's top arms importer accounting for 12 per cent of global arms transfers between 2008 and 2012. China accounted for about six per cent.