The 50-km roadshow started this evening from Naroda Gam and will culminate in Gandhinagar South, passing through 16 seats. 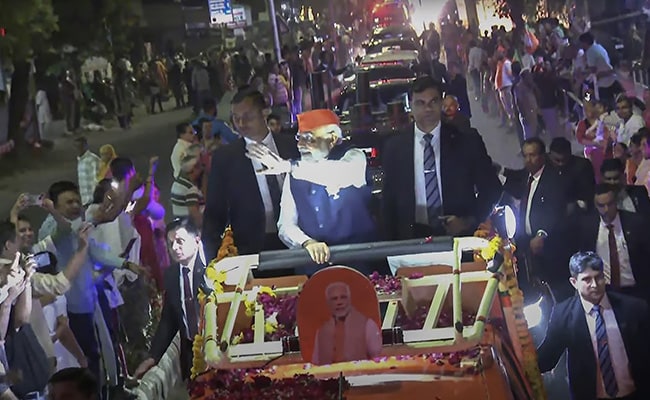 Prime Minister Narendra Modi held a mega roadshow -- said to be the longest-ever by an Indian leader -- in home state Gujarat, which voted in the first phase of assembly elections on Thursday. There are only four days to go before the areas he passed through vote in a contest that's seen as a prestige battle for the BJP. The party is seeking a seventh straight term in the state, which it is ruling since 1995.

The choice of the Prime Minister's route has been a statement of sorts. The 50-km roadshow started Thursday evening from Naroda Gam -- one of the epicentres of the 2002 riots following the fire in Sabarmati Express in Godhra -- which is trying to put the past behind.

It ended at Gandhinagar South after making its way through 16 seats -- including  Thakkarbapanagar, Bapunagar, Nikol, Amraiwadi, Maninagar, Danilimbda, Jamalpur Khadia, Elisbridge, Vejalpur, Ghatlodia, Naranpur and Sabarmati. It took more than 4 hours to traverse the route.

The roadshow was the BJP's biggest event in this election, where thousands marched to festive drumbeats, waving party flags. The Prime Minister, festooned with garlands, rode an open vehicle, waving to cheering crowds that lined the roads.

The BJP claimed it was the longest roadshow by an Indian political leader. There were multiple stops along the way, at monuments honouring famous personalities, including including Pandit Dindayal Upadhyay, Sardar Vallabhbhai Patel, and Netaji Subhas Chandra Bose.  PM Modi offered floral tributes at the monuments.

The BJP has fielded the daughter of a riot convict from the Naroda seat, which has been voting for the party since 1990.

The candidate, 30-year-old Payal Kukrani, is the daughter of Manoj Kukrani -- one of the 16 convicts in the Naroda Patiya riots case in which 97 Muslims were killed. An anaesthetist, she is among the youngest candidates fielded by the party this time.

Manoj Kukrani, who was sentenced to life imprisonment, is currently out on bail. The Gujarat High Court had upheld his conviction and that of 15 others.

Arvind Kejriwal's Aam Aadmi Party has fielded Omprakash Tiwari, a two-term municipal councillor from Naroda who contested from the seat on a Congress ticket in the 2017.

PM Modi – the state's most popular and longest-serving Chief Minister – is the face of the campaign. So far, he has addressed 20 rallies in the state and seven others are scheduled ahead of the second phase.