Delhi Encounter: Two of the Punjab-based men were involved in the killing of Balwinder Singh in Punjab, officials said. 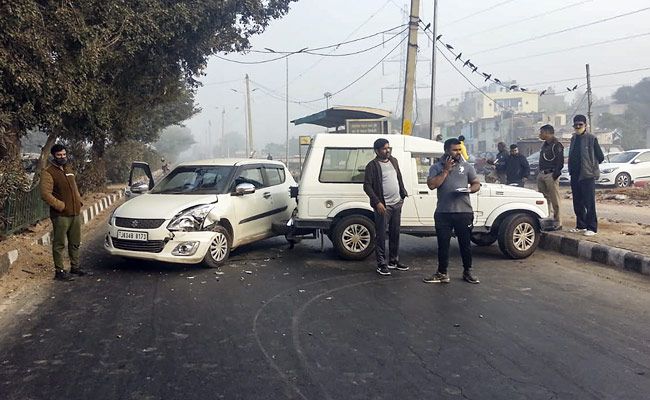 East Delhi Encounter: Two of them are from Punjab and three belong to Kashmir, officials said.

The five suspects were arrested after an encounter with police in east Delhi's Shakarpur area, they said.

Police claimed that with these arrests they have been able to unearth a nexus involving Pakistan's Inter-Services Intelligence, Pro-Khalistan radicals, Hizbul Mujahideen and those involved in narco terrorism.

Of the five accused, Gurjit Singh and Sukhdeep Singh are residents of Gurdaspur in Punjab, while Shabir Ahmad, Md. Ayub Pathan and Riyaz Rather are from Kashmir and are affiliated with terrorist organisation Hizbul Mujahideen, a police officer said.

Gurjit and Sukhdeep were allegedly involved in the killing of Balwinder Singh in Punjab, he said.

Balwinder Singh, who had received the Shaurya Chakra for fighting militancy, was shot dead in October.

Deputy Commissioner of Police (Special Cell) Pramod Singh Kushwah said a police team swung into action after it received a tip-off on Monday morning that two Punjab-based "criminals were supposed to receive some money from three Kashmiris".

"On this specific information, five people were arrested from the Laxmi Nagar area in Delhi after a brief exchange of fire," he said.
Three pistols, two kilograms of heroin and Rs 1 lakh in cash were recovered from them along with the two cars in which they were travelling, he said.

During preliminary investigation, it has emerged that there was an attempt by the ISI to link up terror outfits active in Kashmir with Khalistan operatives, he said.

"It has emerged that Pak's ISI along with Pakistan-based Khalistan radicals Harmeet Singh (Chief of Khalistan Liberation Force) and Lakhbir Singh (Chief of KZF-Khalistan Zindabad Force; based in Pakistan) in furtherance of their conspiracy to revive militancy in Punjab, have been using gangster Sukh Bhikhariwal for targeted killings," he said.

The three Kashmir-based men were supplying money to the other two to carry out targeted killings, he said, adding the money was from the sales of drugs.

"They were selling drugs and the proceeds were used for financing terror in Punjab," the officer said.

Preliminary interrogation has revealed that Gurjit and Sukhdeep were roped in by gangster Sukh Bhikhariwal through a jailed gangster Ravinder Singh lodged in Ferozepur Jail, he said.

The accused duo were provided with monetary support and sophisticated weapons. In October, they were tasked to execute Shaurya Chakra recipient Balwinder Singh Sandhu, he said.

"After executing his killing on October 16, they had been hiding at different hideouts arranged by Sukh Bhikhariwal. They were again being tasked to execute targeted killing of an important person in Delhi.

"Before divulging more details, Sukh Bhikhariwal asked them to receive money from their associates based in Kashmir for arranging logistics," the DCP said.

Accused Pathan was operating as an overground workers of terrorist organisation Hizbul Mujahiddin. He was following instructions of his cousin Abdul Majeed Khan, who is presently based in Rawalpindi and one of the senior operative of Hizbul Mujahiddin.

"Sadakat is said to be handling the channeling of funds through Narco-Terrorism. Sadakat tasked them to receive a consignment of narcotics which was infiltrated to India through Pakistan and deliver the same to his other contacts in Punjab," he said.

They were also tasked to collect the money earned through the sale of drugs and disburse the same to different persons involved in terrorism.

"On the instructions of Sadakat, Pathan along with his associates Shabir Ahmad Gojree and Riyaz Rather came to Delhi for giving Rs 1 lakh to the Punjab-based gangsters and that they were also carrying two kg heroin which was to be given to some other associates in lieu of money," Mr Kushwah said.