The 41 Billion-Dollar Wealth Gap Between Anil And Mukesh Ambani

Mukesh Ambani toppled China's Jack Ma as Asia's richest man, after driving a telecommunications revolution in India. Meanwhile Anil Ambani has had a difficult year, with some of his businesses suffering legal and liquidity challenges. 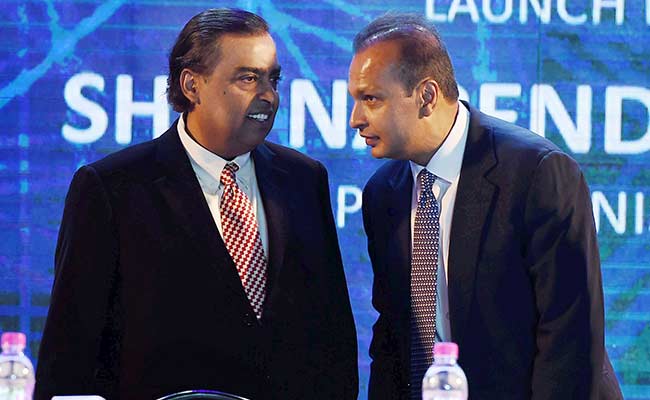 Over the past year, the fortunes of the two brothers at the helm of India's wealthiest dynasty have grown apart -- to more than $40 billion apart.

Elder sibling Mukesh Ambani, 61, toppled China's Jack Ma as Asia's richest man, after driving a telecommunications revolution in India that propelled his petrochemicals conglomerate Reliance Industries Ltd. into the $100 billion club. His personal fortune has swelled to $43.1 billion, according to the Bloomberg Billionaires Index, $5.2 billion ahead of Ma and just ahead of Microsoft Corp.'s former chief, Steve Ballmer.

Meanwhile Anil Ambani, two years his junior, has had a difficult year, with some of his businesses suffering legal and liquidity challenges that roiled stocks, cutting his personal fortune by almost half to $1.5 billion, according to the index.

Neither the brothers nor their groups responded to questions for this story regarding their wealth or business operations. 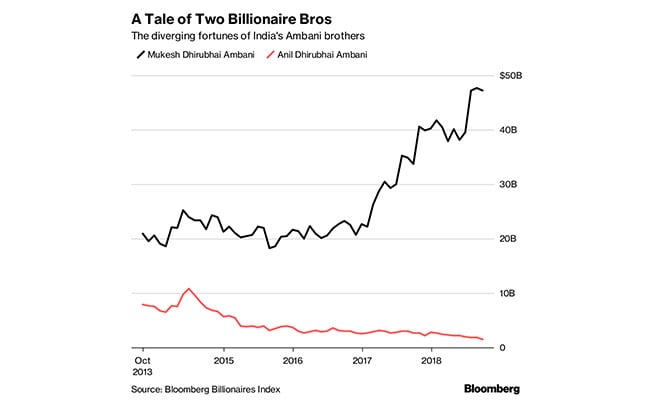 The tale of the two brothers' diverging fortunes began 16 years ago, when their rags-to-riches father Dhirubhai Ambani, whose life inspired a Bollywood film, died of a stroke without leaving a will. The industrialist, who started out as a gas-station attendant in Yemen, had built a vast business empire, financing massive factories by selling so many shares to small investors that stockholder meetings had to be held in a football stadium.

A feud between his two sons following their father's death dogged the group until their mother, Kokilaben, stepped in during 2005 and brokered a truce. Mukesh got control of the flagship oil refining and petrochemicals, while Anil got the newer businesses such as power generation and financial services. He also took over the telecoms unit, which under Mukesh had expanded aggressively by bundling phones with mobile connections at throwaway prices.

At the time, the wireless division seemed to give Anil some of the more promising opportunities. Crude oil prices had climbed to a then-record price of more than $60 a barrel in 2005, sparking concern that refiners' margins may get eroded. India's burgeoning mobile-phone market was hailed as the future.

A non-compete clause between the brothers kept Mukesh out of that arena until the agreement was scrapped in 2010. Mukesh quickly returned, pumping in more than 2.5 trillion rupees ($34 billion) over the next seven years to build a speedier 4G wireless network for his Reliance Jio Infocomm Ltd.

"It was a very, very big bet," said James Crabtree, a professor at the Lee Kuan Yew School of Public Policy in Singapore and author of the book "The Billionaire Raj," which examined wealth inequality in India. Jio also gave Mukesh the chance to forge his own legacy beyond the shadow of the businesses he had inherited, he said. "Jio in that sense was an all-in bet."

It took a long time to pay off. Reliance's shares lagged S&P BSE Sensex index for most of the past decade as investors watched Mukesh pour money into his telecom network with little sign of a return at first.

When it came in 2016, the impact was dramatic. By July this year, less than two years after starting the service, Jio had signed up 227 million users and was making a profit. Rivals were bleeding as Mukesh's upstart embarked on a devastating price war, offering monthly plans for as little as $2.

"Reliance's strategy to diversify beyond the energy sector was the biggest game changer," said Sanjiv Bhasin, executive vice president at India Infoline Ltd. "Mukesh Ambani had the 10-year vision to foresee that data will be the next gold and he invested heavily."

What financed that investment was Dhirubhai's old oil and petrochemicals business, which, expanded by Mukesh, still accounts for 90 percent of Reliance's profit. Cash flow from the business, together with a blue-chip rating gave Reliance Industries access to a large pool of cheap capital. "Mukesh Ambani has very adroitly used this competitive advantage," said Saurabh Mukherjea, founder of Marcellus Investment Managers.

Meanwhile, Anil has been selling assets to quell investor concerns around the indebtedness of some of his companies that contributed to declines in his shares.

Like his brother, Anil invested billions to expand his portfolio, but the younger brother didn't have a cash cow like the oil refinery to finance growth. Instead, like other businesses in India and elsewhere, many of his companies increased debt.

The borrowing spree by local companies caused India's banks to amass one of the world's worst bad-loan ratios and when the central bank started cracking down on the resulting $210 billion mountain of stressed debt, highly leveraged companies came under pressure.

"The only options any indebted company has is to sell assets, seek refinancing or get new investors," said Crabtree in Singapore.

Of Anil's businesses, shares of Reliance Naval & Engineering Ltd. saw the worst decline this year, losing 75 percent. Bought in 2015 as part of his bet on defense as the next engine of growth, the warship and submarine maker has proven hard to turn around.

Its loan accounts have been "irregular or substandard" since 2014, the company said in March. The defense contractor is in arbitration with ex-owners over the latter's alleged breach of some warranties. Auditors in April cautioned against the firm's ability to survive and two creditors have an ongoing lawsuit to send Reliance Naval into insolvency. In a stock exchange filing in April that sought to allay the auditor's concerns, the company said it is engaged with its lenders and is confident on reaching a solution "to resolve the financial position of the company and to continue as a going concern."

Another of Anil's defense firms has come under scrutiny over the 2016 negotiations between France and India for $8.7 billion of French Rafale warplanes. In an Aug. 20 statement, Anil and his company denied allegations from opposition lawmakers that the Rafale deal unfairly benefited his company, saying the lawmakers had been "misinformed, misdirected and misled by malicious vested interests and corporate rivals."

Anil's Reliance Infrastructure Ltd., which built Mumbai's first metro line, missed a bond payment in August as it waited for proceeds from the sale of power transmission assets to fellow billionaire Gautam Adani's unit to cover the amount. It plans to be debt-free by next year, Anil said at a briefing in August. 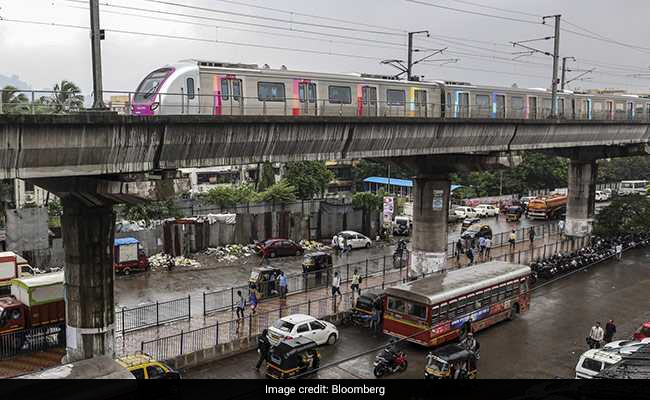 Electricity generator Reliance Power Ltd., also part of Anil's group, has failed to stem a decade of overall decline in its shares since its record IPO in 2008, just as the global financial crisis hit.

The group's profitable financial services firm Reliance Capital Ltd. has also seen its shares decline this year, despite staying away from bad news. 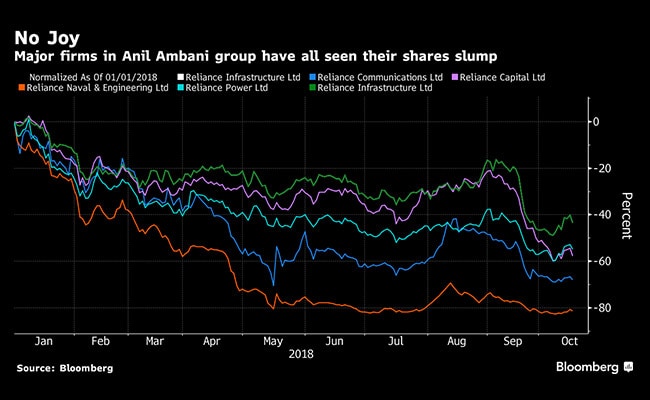 But the biggest challenge for Anil's empire came from his brother's business.

Reliance Communications Ltd., once the flagship of Anil's portfolio, was battered by the price war Jio started. Last month, Rcom sold its 178,000 kilometer fiber-optic network for 30 billion rupees as part of a disposal that will see it divest of almost all of its wireless assets and exit from the mobile phone business.

The buyer was Mukesh's Jio.

RCom "was the crown jewel given away to Anil Ambani after the family businesses split," said Bhasin. "Then the debt and interest burden spiraled."

In May, a creditor persuaded a court to begin insolvency proceedings for RCom before agreeing to an out-of-court settlement.

The sale of RCom assets to Jio brings the saga of the two brothers full circle and sets the stage for the next chapter in the story of one of India's great business dynasties.

Anil is gradually unwinding RCom's debts and refocusing the firm toward real estate. This month he told investors that a property development in Navi Mumbai, a planned city across the bay from India's financial capital, will create 250 billion rupees in value for investors.

"It may be a late coming but at least he is not running away," said Bhasin, who remains bullish on the group's infrastructure, finance and power businesses.

Mukesh is gearing up for an even bigger gamble. In July he announced plans for an e-commerce foray that would marry the group's telecom and retail business to take on global rivals Amazon.com Inc. and Walmart Inc.

While the news helped boost shares of Mukesh's Reliance Industries since the announcement, some investors are sounding a note of caution about another ambitious expansion. Reliance Industries' total debt has risen in the past five years and non-core investments have shown muted returns on capital. 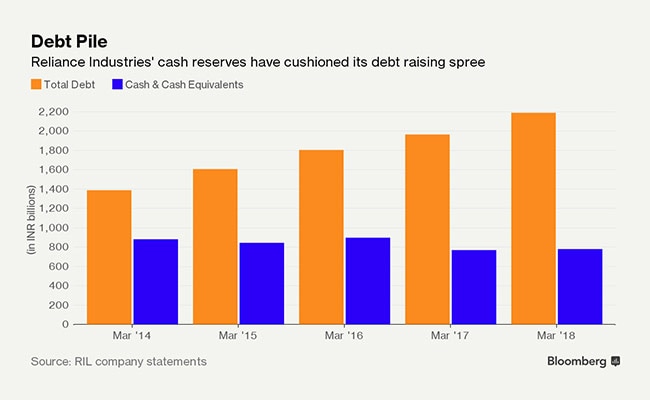 "There's a reason investors put a discount on holding companies with diverse businesses," said Crabtree, explaining that telecom diversification worked but "taking it much further may be one too many rolls of the dice."

In the past few weeks, Mukesh has faced his own challenges.

A verdict by India's top court last month barred non-government use of a national biometric database that telecom operators including Jio had been using to sign up customers. The prospect of a multi-fold rise in verification costs for the telecom company, together with a slump in the rupee and rising oil prices contributed to a 11 percent drop in Reliance Industries' stock this month.

Still, the media spotlight has been on Mukesh and his wife Nita, head of the Reliance Foundation, for a very different reason. Both their eldest son and daughter got engaged this year, putting the Mumbai and Bollywood elite on high alert for two epic Indian weddings. Judging by Akash's lavish engagement party this June in the family's $1 billion Mumbai home with 27 storeys and 600-staff, they won't be disappointed.

- With assistance by Jack Witzig, and Blake Schmidt

(Except for the headline, this story has not been edited by NDTV staff and is published from a syndicated feed.)
Comments
Mukesh AmbaniAnil AmbaniReliance Businesses