30 Children Born Onboard Shramik Special Trains Since May 1: Officials

The national transporter has run around 2,800 Shramik Special trains so far and these births are a welcome relief from the daily routine of chugging trains. 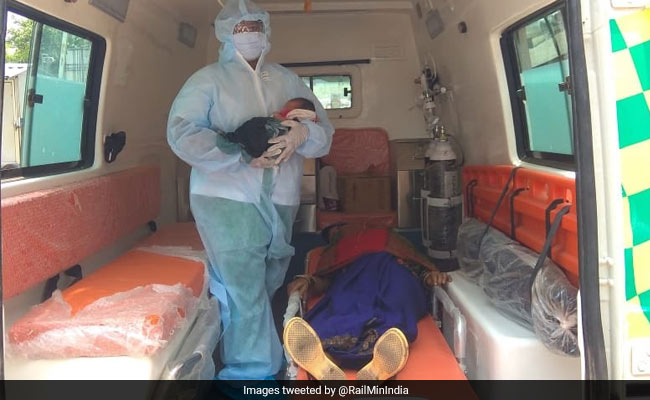 Ishwari Devi, her newborn child were admitted to a hospital in Chhattisgarh by Indian Railways (File)

Thirty children were born onboard Shramik Special trains since the beginning of May, providing some of the migrant workers a tinge of joy amid all the odds they are facing trying to reach home amid lockdown4.

Be it 23-year-old Sangeeta or 27-year-old Madhu, who were stranded due to the lockdown, often without food, water or any resources that pregnancy demands for almost two months, boarding the migrant special trains was a sigh of relief.

Last Monday, nine-month pregnant Sangeeta boarded a Shramik Special train from Bangalore for her hometown in Uttar Pradesh. On board, she gave birth to a healthy baby boy with the help of her co-passengers.

Soon after, she was provided with medicines and, when she reached, a team of doctors was waiting for her with the necessary supplies. The Bangaluru police even shared a photo of the baby sent to them by the couple.

On Friday, 27-year-old Madhu Kumari delivered a baby during her journey home to Uttar Pradesh. When she went into labour, the railway staff present in the train informed the Railway Protection Force (RPF).

The baby was born before the train reached Jhansi. The woman received medical care at the station.

"We are keenly aware that our staff at times need to act as the situation demands and they do so," Railways spokesperson RD Bajpai said. "We are proud to say that all the babies born on these trains are healthy and their mothers are doing well. We are very happy that we could help them."

However, perhaps, the first baby to be delivered on board these trains was Mamta Yadav's child who came to the world on May 8 while his mother was travelling to Bihar from Gujarat alone.

Officials say the train left the Jamnagar railway station at 8 pm. Mamta, 35, began experiencing labour pain around midnight. Her compartment was turned into a labour room of sorts with other passengers moving out.

A team of doctors and railway staff supervised Ms Yadav's condition as she delivered a healthy baby girl, whom her co-passengers instantly christened "Corona Kumari", the officials said.

"We have a well-oiled system to deal with medical emergencies," Mr Bajpai said.

Whenever a passenger needs help, the onboard staff alerts the station where medical aid is available and the doctors who live in railway colonies around the station are always there to deal with any emergency, according to the Railways spokesperson.

On May 13, Pinky Yadav, who is in her twenties, gave birth to a baby boy on board the Ahmedbad-Faizabad Shramik Special train with the help of the RPF personnel.

She got medical attention at the Kanpur station in Uttar Pradesh, but had to be shifted to a district hospital for treatment.

Twenty-three-year-old Ishwari Devi gave birth to a baby boy onboard the Habibganj-Bilaspur migrant special train last Sunday with the help of the train staff and other women passengers.

The Railways not only provided her with the necessary medicines, but also arranged for her admission to the Chhattisgarh Institute of Medical Sciences when she needed further care.

The national transporter has run around 2,800 Shramik Special trains so far and these births, which almost always leads to a lot of manic activity, are a welcome relief from the daily routine of chugging trains.

While these children are born surrounded by strangers, their first cries are heard by thousands on board.

A baby girl born on Sunday onboard a special train to Uttar Pradesh was named "Lockdown Yadav".