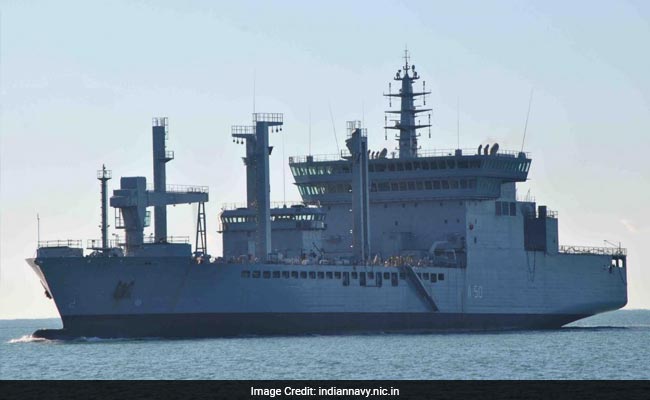 Indian Naval ships - Deepak (in picture), Delhi and Tarkash - under the Command of the Flag Officer Commanding Western Fleet, Rear Admiral Ravneet Singh will visit Dubai from May 7 to May 10.

Dubai: Three Indian Naval ships will visit Dubai this week as part of a month-long deployment to the strategic Gulf region and enhance bilateral defence ties as well as India's experience in combating maritime threats with regional navies.

Indian Naval ships - Deepak, Delhi and Tarkash - under the Command of the Flag Officer Commanding Western Fleet, Rear Admiral Ravneet Singh will visit Dubai from May 7 to May 10.

The ships are part of the Indian Navy's Western Naval Command based at Mumbai and are on a month-long deployment to the Gulf to enhance bilateral ties with friendly regional navies, Indian embassy in Abu Dhabi said in a statement.

During the visit, the naval ships will have professional interactions with the defence forces aimed at enhancing co-operation and sharing the nuances of naval operations including disaster management and combating maritime threats of terrorism and piracy.

The involvement of Indian Naval ships in combating piracy off the coast of Somalia since October 2008 has further strengthened bilateral ties and interaction with navies in the region, it said.

India and UAE are also members of Indian Ocean Naval Symposium (IONS), a voluntary and co-operative initiative between 35 countries of the Indian Ocean Region, which has served as a forum for sharing of information and cooperation on maritime issues.