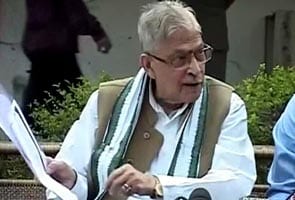 New Delhi: Former auditor RP Singh's claims that he never put the Rs 1.76 lakh crore loss figure in national auditor CAG's report on the 2G scam have finally given the government a chance to go on the offensive. After a meeting of the Congress core group on Friday, Sonia Gandhi remarked that she thought the BJP has been "exposed".

Mr Singh also hinted that CAG officials preparing the 2G report had been guided by BJP leader and head of a parliamentary committee looking into the scam, Murli Manohar Joshi.

Mr  Joshi has denied all charges made by the former auditor and said he'll quit it the charges stick. He hit back at Sonia Gandhi in an interview to NDTV. (Watch: Murli Manohar Joshi speaks to NDTV)

Mr Singh, who was the Director General of Audit with the Comptroller and Auditor General (CAG) of India, claimed Mr Joshi spoke to CAG officials a day before the 2G report was released. Mr Singh also questioned the national auditor's estimates of presumptive loss figure of Rs. 1.76 lakh crore in the 2G spectrum allocation. He said that according to him, the loss due to the first-come-first -served policy followed by the government was Rs. 37,000 crore and this too, he said, was entirely recoverable. (Watch: RP Singh on CAG's report on 2G)

The government has always contested the CAG's estimated loss figure.

The former auditor's claims sparked a furore with Congress and Left leaders demanding a reply from the BJP, as well as the CAG. When reporters asked UPA chairperson Sonia Gandhi whether the BJP had been "exposed" by the former auditor's revelations, she said "Yes, absolutely I think so."

Murli Manohar Joshi has, meanwhile, questioned  the timing of Mr Singh's revelations, "...don't know why RP Singh has spoken out now. It's a conspiracy by the Congress and other vested interests just to malign the CAG and the PAC."

"I said I will quit because it's a challenge to Mrs Gandhi. She said we are exposed, I can say, 'Sorry madam, you are exposed'," he told NDTV.

But Mr Singh's charges put the BJP leader into a tight corner, with the government as well as the Congress and the Left saying that they must be investigated.

"The allegations must be probed. It is a serious issue. These allegations will be discussed in Parliament," senior Congress leader and Parliamentary Affairs Minister Kalam Nath said today.

The DMK wants this matter discussed in Parliament and has conveyed this to Mr Kamal Nath. The party is expected raise this issue in the Business Advisory Committee on Monday. The Samajwadi Party too wants a discussion on the issue.

The Left also demanded that Mr Joshi explain his role. "The allegation that he influenced the report is very serious. Murli Manohar Joshi should explain his position," said CPI's D Raja.

BJP spokesperson Ravi Shankar Prasad  termed the allegations against Mr Joshi as "baseless," and said, "Why did not RP Singh say anything for a year. He is a pawn in the hand of the government and the Congress. This is a conspiracy. They just want to weaken the CAG and they repeatedly want to raise questions and allegations against the CAG."

Mr Singh has disowned the CAG report saying he was kept out of the report-making process while it was being finalised. Mr Singh said that the loss figures that he calculated were recoverable, and that in the final stages of the report, he was not even consulted by his supervising officers.

"After completing the audit of Ministry of Telecom, which was under my direct charge, I prepared a draft audit report covering each and every aspect ... My report did not contain any loss figure," he said.

Mr Singh further added that his report carried "two types of figures which indicate the less recovery" based on Rs. 1,658 crore that was charged for giving out pan-India licence along with spectrum.

"Another figure which I had indicated not as exactly as a loss but that amount that can be recovered. I found some people having more spectrum than what is provided under contractual agreement," Mr Singh said.

He said that his report mentioned that Rs. 37,000 crore can be recovered from those holding excess spectrum.

The CAG report, which was tabled in Parliament in November 2010, had pegged the revenue loss to the exchequer on account of allocation of 2G spectrum in 2008 at whopping Rs. 1.76 lakh crore raising a political storm that led to sacking of Telecommunications Minister A Raja and setting up of a Joint Parliamentary Committee (JPC) to probe the issue.

The controversy over the 2G spectrum allocation also led to the cancellation of 122 licences by the Supreme Court. The issue took a different turn when the recently concluded auction of 2G spectrum evoked lukewarm response and the government managing to garner only Rs. 9,407 crore.