Congress president Rahul Gandhi said the parliamentarians were only "trying to protect PM Modi" at a time when his government's involvement in the Rafale deal was being questioned. 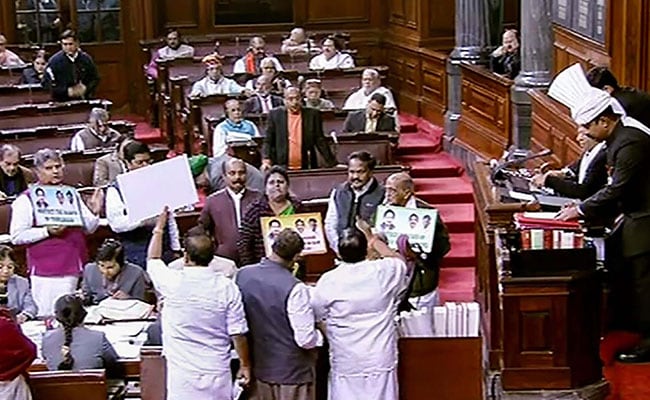 Lok Sabha Speaker Sumitra Mahajan today suspended 26 AIADMK legislators for the next five sittings after they created a ruckus in the house over the Cauvery issue, frequently interrupting a heated debate on the Rafale fighter jet deal.

Footage of the proceedings showed the parliamentarians trooping into the well with placards and flinging pieces of paper in the air. The sloganeering even prompted Congress president Rahul Gandhi to accuse the AIADMK of "trying to protect Prime Minister Narendra Modi" at a time when the centre's involvement in the aircraft deal was being questioned.

Ms Mahajan suspended the AIADMK members under rule 374(A), which allows the speaker to punish those found causing a commotion in the house. The parliamentarians were protesting against the Karnataka government's move to construct a dam over the Cauvery in Mekedatu, and have sought the centre's intervention in the matter.

One of the suspended parliamentarians, M Thambidurai, said the BJP government gave Karnataka approval for the Mekedatu project because it wants to bag some seats in the southern state in the upcoming Lok Sabha election. "Protesting is our democratic right, and there has been no response from the government," he added.

Mr Gandhi also accused Defence Minister Nirmala Sitharaman of using the protesting parliamentarians to duck questions on the Rafale aircraft deal. "The Defence Minister is hiding behind the AIADMK. She publicly stated that the price is a secret. But she has been contradicted by the French President himself, who said that the price was not a secret," he said.

AIADMK members disrupted proceedings in both houses of parliament today. The upper house had to be adjourned twice in the afternoon amid a ruckus over the issue and finally for the day, minutes after it reassembled at 3 pm.