"If Not Anil Ambani, Can I Say AA, Ma'am?" Rahul Gandhi During Debate

Rahul Gandhi's supposition was that Mr Ambani, who he described as a failed businessman, was chosen illicitly for a nearly $8.7 billion deal for Rafale fighter jets that are being bought from French defence giant Dassault.

Rahul Gandhi proceeded to address Anil Ambani as "Double A" in the rest of his statement.

Upon being told that he could not name businessman Anil Ambani in his speech in parliament on Wednesday, opposition leader Rahul Gandhi asked, making a great show of disbelief, "I can't name him?" Lok Sabha Speaker Sumitra Mahajan pronounced that would be against the rules. Mr Gandhi, for effect, repeated his query. Same answer. "Ma'am, may I refer to him as AA, then? Is that ok?" Mr Gandhi asked, also slyly inserting, to protests from the ruling party, "Is Mr Ambani a member of the BJP?"

Mr Gandhi's supposition, during a debate in parliament, was that Mr Ambani, who he described as a failed businessman, was chosen illicitly for a nearly $8.7 billion deal for Rafale fighter jets that are being bought from French defence giant Dassault. Prime Minister Narendra Modi, Mr Gandhi alleged during the debate, as he has so often outside parliament, gypped the country of 30,000 cores by ensuring Mr Ambani gets the offset contract in the Rafale deal.

Mr Gandhi sprinkled his speech with many references to "AA", once or twice referring to Mr Ambani by his name and then making a bit of a show of correcting himself. "Sorry, AA," he said, to the great delight of the Congressmen seated around him. 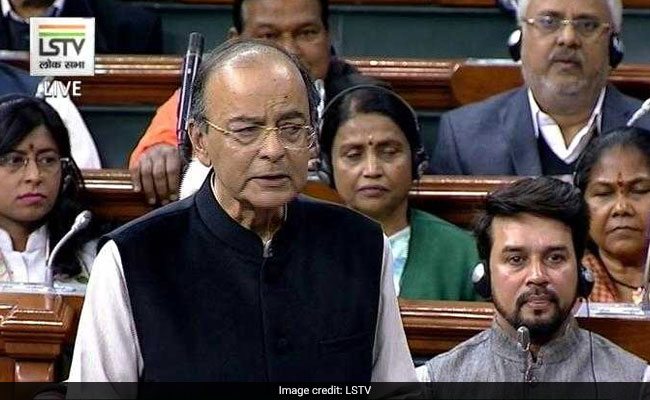 In December, the Supreme Court said it will not investigate the deal struck by PM Modi during a visit to France in 2015 for 36 Rafales which saw Mr Ambani's Reliance Defence selected as a major local partner. As part of the contract, Dassault has to invest 30 percent of the value of the overall deal in Indian firms as part of PM Modi's stated commitment to reducing the country's dependence on importing defence equipment.

Dassault said in October it picked Reliance as a partner on its own, countering a French online media report that said the Indian government insisted on the firm as a condition of the contract. Former French President Francois Hollande, who had finalized the intergovernmental deal with PM Modi when he was in office, first said that there was pressure on Dassault to choose Reliance; later, however, he issued a statement that seemed to be a u-turn.

Finance Minister Arun Jaitley countered Mr Gandhi's allegations in parliament, accusing him of falling into the category of those who have "a natural dislike for the truth." Referring to the Supreme Court's verdict last month, the Finance Minister said that every contention raised against the Rafale deal had been found invalid by the judges. "Since Mr Gandhi has been using abbreviations," the minister said he would like to keep with the trend. "Was he playing in the lap of one Q," the minister asked, initialing the controversial businessman Ottavio Quattrocchi, who was a close friend of Mr Gandhi's family. Mr Quattrocchi died in 2013 and was accused of a key role in the Bofors arms scam, one of India's most controversial arms deals, which was struck when Mr Gandhi's father, Rajiv, was Prime Minister.