Russia-Ukraine conflict: An Air India flight decided to turn back to Delhi today after a NOTAM, or notice to airmen, was sent to all flights heading to Ukraine 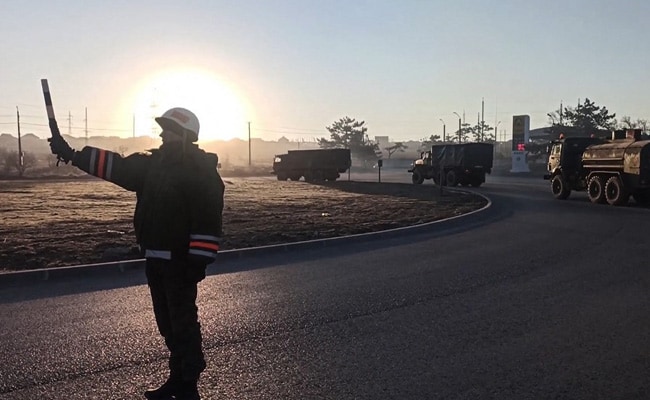 Indians in Ukraine who need information and assistance can contact the Ministry of Foreign Affairs, or MEA, which has set up a dedicated control room. Russian forces have entered breakaway eastern Ukraine areas and Ukraine has closed its airspace. An Air India flight going to Ukraine to bring home Indians is also returning to Delhi.

In a statement, the MEA said India's embassy in Ukraine has set up a 24-hour helpline. "We are closely monitoring the rapidly changing situation. Our focus is on safety and security of Indians, particularly students. The MEA control room is being expanded and made operational on 24x7 basis," a source told NDTV.

Below are the control room's details given by the MEA:

Advisory to all Indian Nationals/Students in Ukraine
as on 24.02.2022.@MEAIndia@PIB_India@DDNewslivepic.twitter.com/CprwFPoZ4o

The Indian embassy in Ukraine this morning issued a set of guidelines to students and others who live in the country. Kyiv was among the cities targeted by Russia. The Indian embassy warned that citizens "traveling to Kyiv, including those traveling from western parts of Kyiv, are advised to return to their respective cities temporarily, especially towards safer places along the western bordering countries."

IMPORTANT ADVISORY TO ALL INDIAN NATIONALS IN UKRAINE AS ON 24 FEBRUARY 2022.@MEAINDIA@PIB@DDNEWSpic.twitter.com/e1i1lMuZ1J

The embassy, in a tweet last week, said it was aware of reports of people not getting flights; however, it asked Indians living in Ukraine not to panic.

The Air India flight decided to turn back to Delhi today after a NOTAM, or notice to airmen, was sent to all flights heading to Ukraine.

With large-scale military operations unfolding in eastern Ukraine, commercial flights would be at a very high risk due to the chaotic nature of the airspace, which would likely be crowded with military anti-aircraft activity.