The journalists had been accused of "promoting enmity between different groups on grounds of religion" and "being a part of criminal conspiracy". 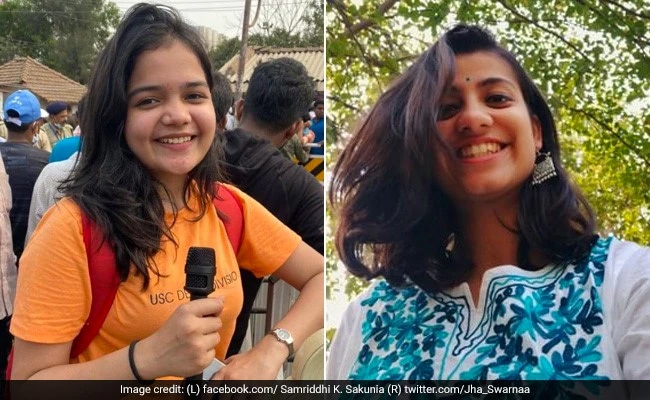 Two women journalists detained after they accused the Tripura police of "intimidation" have been granted bail by the Chief Judicial Magistrate (CJM) Court in the Gomati district of Tripura. Sammriddhi Sakunia and Swarna Jha were covering the recent violence in Tripura. They were detained in Assam on Sunday after a case was filed against them by the Tripura police for "spreading communal disharmony" following their reportage on the vandalism at a mosque in the state.

The Editors Guild of India had denounced police action against the journalists and demanded their immediate release and "restoration of their freedom to travel".

Presenting his arguments for the bail of the journalists, advocate Pijush Biswas asserted there was no evidence that they spread communal hatred. "The charges made against the journalists are completely baseless. Police filed the case with mala fide intention," he insisted. Mr Biswas said his clients will move the Supreme Court for quashing the case.

Ms Sakunia and Ms Jha are journalists with HW News Network. They were detained in Assam's Karimganj on Sunday and were brought to Tripura on transit remand for production before the magistrate's court in Udaipur, around 50 km from state capital Agartala.

The Tripura police had said in a statement that the case involved a tweet by Samriddhi Sakunia, who visited a half-burnt prayer hall at a private house where claims were made of a Quran being burnt. A press release issued by the Tripura police claimed that the posts by Ms Sakunia were not true and promoted a sense of hatred between communities.

The police said they found no religious document was burnt and the journalists were asked to come to Agartala for questioning. They were detained after they were found to have left the state.

Tripura police suspect that the videos uploaded by them are doctored. In a tweet on November 11, Sakunia had written, "#Tripuraviolence Darga Bazaar: On 19th October at around 2:30 am, some unidentified people burnt down the mosque in Darga Bazaar area. People in the neighborhood are very upset with the fact that now they don't have any place nearby to go and pray. There's no other masjid nearby."

The two journalists told the media that they were detained by the police while on their way to the airport. After three-and-half hours at the police station, the escort team from Tripura came. "We asked them to wait, saying our lawyer is on way. But they loudly said, 'no one is coming'. They also did not show us a copy of the order," they said.

The journalists accused the police of "intimidating" them on Sunday morning. They said they were not allowed to leave the hotel and move to Agartala.

In an official statement, the HW News Network - where the women work - said the detention took place "despite the police allowing them to leave the hotel and giving them a week's time to record a statement... This is sheer harassment and targetting of the press on part of Tripura police".

Last week, tweets were circulated on social media alleging that a mosque in Tripura has been vandalised during a rally by the Vishwa Hindu Parishad. The Union home ministry issued a strong denial, saying the reports were fake and "complete misrepresentation of facts". The mosque in Dargabazar area of Kakraban has not been damaged. But the fake news has been followed by reports of protests and violence in Maharashtra, the ministry said.

Facebook, Twitter, and YouTube were asked by the Tripura Police to provide details of over a hundred accounts from which the posts were allegedly shared. The Tripura police have registered five cases against 71 people - including Supreme Court lawyers, activists, and religious campaigners - for the posts.