2 BSP Leaders Garlanded With Shoes, 1 Paraded On Donkey By Party Workers In Rajasthan

The BSP workers blackened the faces of Ramji Gautam, the national coordinator, and Sitaram, former in-charge of the party's state unit. 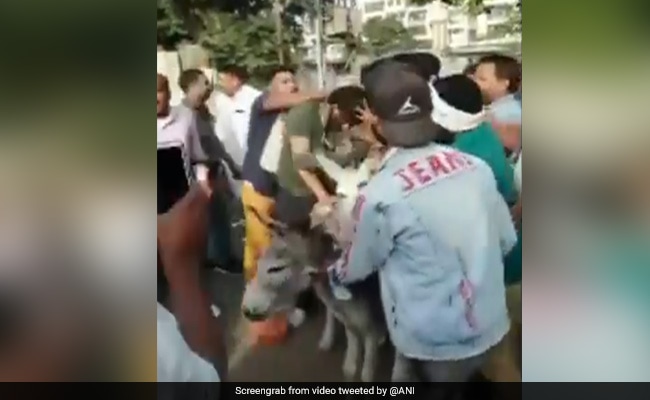 A video of the incident showed the party workers forcing BSP leader to sit on a donkey.

Two BSP leaders were garlanded with shoes, faces blackened and paraded outside the party office In Rajasthan on Tuesday by some of the BSP workers who alleged corruption in ticket allocation.

The BSP workers blackened the faces of Ramji Gautam, the national coordinator, and Sitaram, former in-charge of the party's state unit, and garlanded them with shoes. They also made Ramji Gautam sit on a donkey and paraded outside the party office in Banipark.

"Our workers are upset with the leaders. The workers have worked on the ground for five years but they have given ticket to parachute candidates, who are of the BJP and the Congress, in lieu of money. BSP workers and leaders are being ignored and exploited," a BSP worker present there said.

"We have held three demonstrations here but the leaders have not conveyed our plight (to BSP chief Mayawati). Therefore, we had to take this step," he said.

Condemning the incident, Mayawati termed it as a shameful act and blamed the Congress for it.

In a tweet in Hindi, she alleged that the Congress first indulged in horse-trading and now it is organising attacks on BSP leaders in the state