From 1947 to 2014, only two airports were functional in UP - Lucknow and Varanasi - and air connectivity of the state was confined to around 16 cities. Kushinagar airport has become operational as the 9th airport of UP and airports in the state now connect to 75 major cities, Yogi Adityanath said. 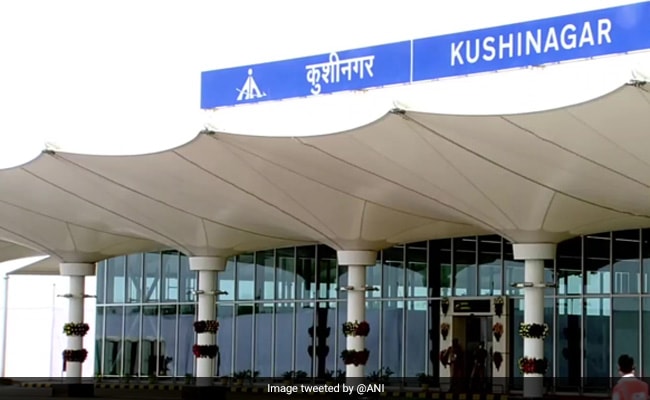 "Kushinagar airport has become operational as the 9th airport of the state," Yogi Adityanath said

Speaking at the event for the inauguration of Kushinagar International airport, the Chief Minister said this will be the ninth airport in Uttar Pradesh.

Yogi Adityanath said work is also progressing for Ayodhya airport and that air connectivity in the state is getting strengthened, which will provide an impetus for development.

From 1947 to 2014, he said that only two airports were functional in Uttar Pradesh, including Lucknow and Varanasi, and air connectivity of the state was confined to around 16 cities, Yogi Adityanath said.

"Kushinagar airport has become operational as the 9th airport of the state whereas there is direct air service from the airports of Uttar Pradesh to 75 major cities," he added.

Later, Yogi Adityanath along with Union Civil Aviation Minister Jyotiraditya Scindia and other Union ministers addressed the media at the airport.

With the Kushinagar airport, it will be easier for people to visit from places like Japan, Korea and Cambodia, he said at the briefing.

Mr Scindia said the number of UDAN air service routes will be increased in the state, adding that the target is to have 1,000 routes across the country.

Kushinagar airport, built at a cost of Rs 260 crore, has a runway length of 3,200 metres and a width of 45 metres. Uttar Pradesh Governor Anandiben Patel, Union ministers Kiren Rijiju, G Kishan Reddy, Arjun Ram Meghwal, VK Singh and Meenakshi Lekhi, among others, were present at the event.