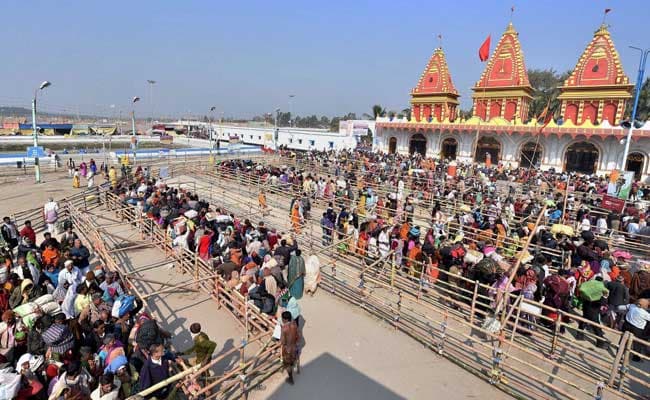 The pilgrims started taking the holy dip from 2.52 AM onwards and the auspicious time for the dip will be over after 2.15 AM tomorrow.

A 62-year-old pilgrim from Ghaziabad developed severe breathing problem and was taken to a hospital in Kolkata by helicopter, Mukherjee told a press conference. Another pilgrim, who sustained burn injuries after a tent located beside the police control room caught fire, was also taken to hospital.

The reason behind the fire was yet to be ascertained. Puri Sankaracharya Nischalananda Saraswati lauded the administration for these arrangements.

The seer, however, said that efforts should also be made to ensure that the entry of people do not make the fair 'unholy'.

The state government and South 24-Parganas district administration have taken a number of measures to avoid any untoward incident and deployed 9,000 policemen and volunteers to provide assistance to the pilgrims.

A drone and 20 vessels, including several from the Coast Guard, were being used for surveillance.

The theme of Ganga Sagar mela being 'Green and Clean' this year, the administration made arrangements for 10,000 toilets so that people could use it.

Gyandas Mohanto of Hanumangarhi Trust, which runs the Kapil Muni Ashram in Gangasagar, handed over the charge to Sanjay Das here.

Promoted
Listen to the latest songs, only on JioSaavn.com
Mohanto said that Sanjay Das will look after day-to-day activities at the fair at Gangasagar next year. Mohanto also demanded that this fair should get the status of a national fair.