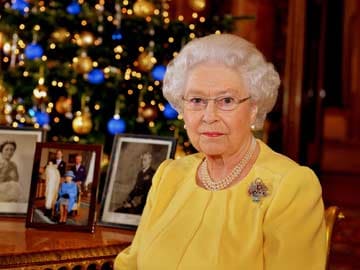 File photo of Britain's Queen Elizabeth II pictured after recording her Christmas Day broadcast to the Commonwealth, in the Blue Drawing Room at Buckingham Palace in central London, on December 12, 2013.

Khemka has been named a Dame Commander of the Order of the British Empire (DBE) for her service to the deprived areas of the West Midlands as principal of West Nottinghamshire College for the last eight years.

"Under her leadership, it has become one of the most eminent further education colleges in the UK. She has embraced the apprenticeship agenda, leading the college to become the largest 16-18 provider in the UK and finding jobs for 700 young people in the first year," read a special citation accompanying the higher awards in this year's list.

"Her charitable trust, the Inspire and Achieve Foundation, is especially focused on those not in education, employment or training. She is in the process of opening a skills centre in India," it added.

A total of 1,195 candidates have been selected for honours this year, with 610 successful women candidates representing 51 per cent of the total.

Actresses Angela Lansbury and Penelope Keith become dames in a list which features more women than men for the first time in history.

The duo, who both have Order of the British Empire (OBE), were tipped to be knighted.

Murray, 26, became the first Briton in 77 years to win the Wimbledon men's singles title in the summer, while Beckham, 38, retired from football in May after a 20-year career.

The honours system recognises people who have made achievements in public life and committed themselves to serving and helping Britain.

The list, founded in 1917, is decided by an honours committee, which goes to the Prime Minister who then recommends the names to the Queen for the official award.

The Queen releases two honours lists every year - her Birthday Honours in June and News Year's Honours in December.

In line with the overall theme this year, women are well represented among the Asian set too with OBE for Gill Harjagbir Bal, headteacher of Wembley High Technology College in London, for services to education, and entrepreneur Priya Lakhani for services to business, community and voluntary initiatives.

Others on the OBE list include pharmacist Ashok Soni for services to community pharmacy and the NHS, and Shahed Ahmed Battiwala, head teacher at Elmhurst Primary School in Newham, London, for services to education.

Next in order of prominence are the Member of the British Empire (MBE) awards which also feature women prominently, including Ranjana Bell, chair of Strategic Independent Advisory Group at Northumbria Police, honoured for services to minority ethnic groups in Tyne and Wear and Northumberland, and Liverpool-based Bisakha Sarker for services to South Asian Dance in Merseyside.

Anil Parbhu Patel, second secretary at the UK Foreign and Commonwealth Office, has been honoured with an MBE for services to British diplomacy.

He is part of an Overseas List of awards which also recognises the work of individuals making a mark in the India-UK sphere with an OBE for Anthony Bruton Meyrick Good, global chairman of Cox's and King's and board member of the UK India Business Council (UKIBC), for services to British business interests in India.

Alison Jayne Barrett, director of English for Education Systems, South Asia, British Council, receives an MBE on the overseas list for services to teaching and learning of English in India.

Two British Punjabis have been singled out for the British Empire Medal (BEM) - Amarjit Kaur Bakhshi for services to the community in Hounslow, south-west London, and Jasvir Jassal for voluntary service to community football in Middlesex.

Among some of the other high achieving Asians, Pakistani-origin professor Ash Amin of the University of Cambridge receives a Commander of the British Empire (CBE) for services to social science.