12 Drown During Ganesh Visarjan In Maharashtra

Devotees bid a grand and emotional farewell to Lord Ganesh as thousands of his idols, both public and domestic, were taken to seashores, lakes and rivers in colourful processions across the state for immersion 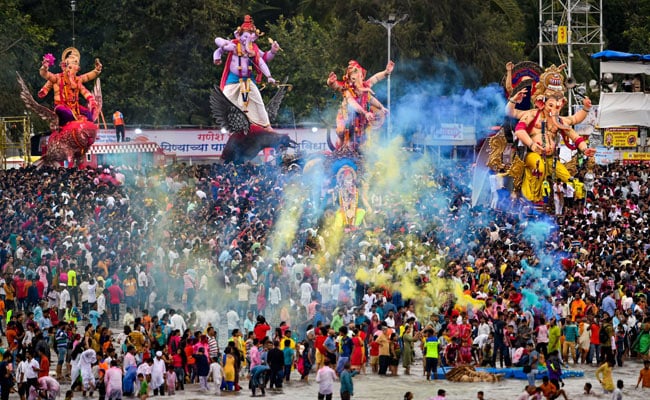 In Mumbai, the immersion of idols was done at 129 places, including Girgaum Chowpatty

A dozen drowning deaths marred the otherwise fanfare-filled immersion of thousands of Lord Ganesh idols in Maharashtra on Thursday amid tight security, bringing down the curtain on the 10-day-long mega festival dedicated to the popular deity.

Devotees bid a grand and emotional farewell to Lord Ganesh as thousands of his idols, both public and domestic, were taken to seashores, lakes and rivers in colourful processions across the state for immersion.

However, the all pervasive festive mood was sullied to some extent by several incidents of devotees either getting drowned or going missing during "visarjan" (immersion).

The immersion processions of idols of various mandals in Mumbai, which witnesses maximum festive grandeur, and Pune, the state's cultural capital which hosts one of the best Ganesh Chaturthi celebrations, were taken out amid great zeal and enthusiasm on the occasion of "Anant Chaturdashi".

Devotees performed one last puja and chanted "Ganpati Bappa Morya, Pudachya Varshi Lavkar Ya" (Hail Lord Ganesh, come back soon next year), before carrying the idols of the elephant-headed God on flower-decked vehicles accompanied by troupes of drummers.

Chief Minister Devendra Fadnavis, who celebrates the festival every year at his official residence in Mumbai, performed puja before proceeding for the immersion of the eco-friendly Ganesh idol.

In Mumbai, the immersion of idols was done at 129 places, including Girgaum Chowpatty, Shivaji Park, Juhu, Aksa, Versova and Marve seashore, and several lakes and artificial ponds set up for the purpose.

The immersion processions of the prominent Ganpati mandals in Mumbai, including the Lalbaugcha Raja, Khetwadicha Ganraj and Ganesh Galli at Girgaum, began in the evening and dragged till late in the night.

Till 10 pm, about 23,000 idols were immersed at various beaches, lakes and artificial ponds in Mumbai, the Brihanmumbai Municipal Corporation (BMC) said.

According to a statement issued by the BMC's Disaster Management Cell, no untoward incident was reported during immersion in the metropolis till 10 pm.

Immersion of some prominent Lord Ganesh idols in Pune, Mumbai and some other cities will go on till Friday morning.

More than 50,000 police personnel were deployed across the metropolis to keep a watch on processions, to maintain law and order, and for crowd control.

Processions were also monitored by over 5,000 CCTV cameras, a police official said.

For better crowd management, the police closed some of the old and dilapidated bridges and roads for traffic.

"We urge you all to ensure a safe, secure and peaceful #GaneshVisarjan," the Mumbai police tweeted in its message to
devotees.

In Pune, idols of five "manache" (revered) Ganpati were immersed in artificial tanks on Thursday evening.

Rain could not dampen the spirit of devotees as thousands of people thronged the streets to bid adieu to the darling deity of the city.

Ganesh idols of Kasba, Tambdi Jogeshwari, Guruji Talim, Tulshibaug and Kesariwada Ganesh Mandals -- traditionally held to be the most prestigious among the Mandals -- were immersed in artificial tanks after grand processions by 6.30 pm.

The processions started around 10 AM with great fanfare, accompanied by traditional Dhol-Tasha (drum) troupes.

Several foreign nationals too participated in the processions, some of them traditional attire.

Hundreds of other Ganesh Mandals joined the processions along the city's main thoroughfares.

More than 8,000 personnel were deployed to guard the immersion processions in Pune, while 169 CCTV cameras and drones kept a close eye on proceedings.

In Nashik, artificial ponds were set up at various places for immersion. Similar arrangements were made in several other cities and towns, so as to avoid pollution of natural water bodies.

As many as 12 persons drowned during immersion of Ganesh idols in the state.

Three persons drowned in Ratnagiri district followed by two each in Nashik, Sindhudurg, Satara districts and one each in Dhule, Buldhana and Bhandara districts, police officials said.

Besides, over half a dozen other people who went for immersion of idols were missing and are feared to have drowned, they said.

The festival, started by Lokmanya Tilak over 100 years ago, was held this year against the background of devastation caused by floods after heavy rains in some parts of the state.