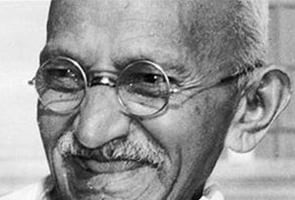 Lucknow: It is not every day that a 10-year-old catches the office of the Prime Minister of India off-guard and without answers. But then, Aishwarya Parashar, a class six student, is no ordinary girl. She has stumped the Prime Minister's Office (PMO) with her Right to Information (RTI) query on when and by what orders was the title of 'Father of the Nation' conferred on Mahatma Gandhi.

Sitting in her small but neatly kept house in Rajajipuram F Block, the backdrop of teddy bears and toys makes her just any other Barbie doll loving girl next door.

But this is only till she starts to speak. Aishwarya, a student of the City Montessori School, Rajajipuram branch, chuckles throughout the conversation on how her mother has "groomed her into the RTI mode", adding that she finds the act so helpful that she has filed two RTIs against garbage dumps outside her school, in the past.

Asked what prompted her to file the RTI application on Gandhi and send it to the PMO, Aishwarya told IANS how the term 'Father of the Nation' had always "somehow excited and interested" her after she read it in her social studies text book.

"I would keep asking my mom 'why is Gandhi referred to as the Father of the Nation', to which my mother mostly had no answers till one fine day she thought of the RTI route". Her mother Urvashi Sharma is happy that the PMO has "at least taken cognizance of the letter", even if the response has not been to their satisfaction.

Aishwarya, the eldest of three siblings, had written to the PMO on Feb 13, seeking a photocopy of the government order (GO) that conferred the famous title of Father of Nation on Mohandas Karamchand Gandhi. The PMO replied that they had no such record whatsoever and directed the query to the Ministry of Home Affairs (MHA), which then referred the case to the National Archives of India (NAI).

The NAI's Assistant Director and Central Public Information Officer Jayprabha Ravindran also had no answers to the poser by the Lucknow girl, and responded with an invite to Aishwarya asking her to visit the Archives to find for herself if there were any such relevant papers. Daughter of Sanjay Parashar, a lecturer at GB Pant Polytechnic College, Aishwarya's mother is an RTI activist as well.

Promoted
Listen to the latest songs, only on JioSaavn.com
The NAI, she added, in a letter dated March 26, was an institution to provide documents and was not in any way a research helping body. It however offered all facilities to the girl in her "quest for the Gandhi research."

History however holds that the title of Father of the Nation was given to the Mahatma by Netaji Subhas Chandra Bose, who in his address on Singapore Radio on July 6, 1944 has addressed Mahatma Gandhi as Father of the Nation. Thereafter on April 28, 1947 Gandhi was referred with the same title by Sarojini Naidu at a conference.