Ms Farana, wife of a cab driver, is contesting from Begumpet division and Ms Rekha from Ramgopalpet division. 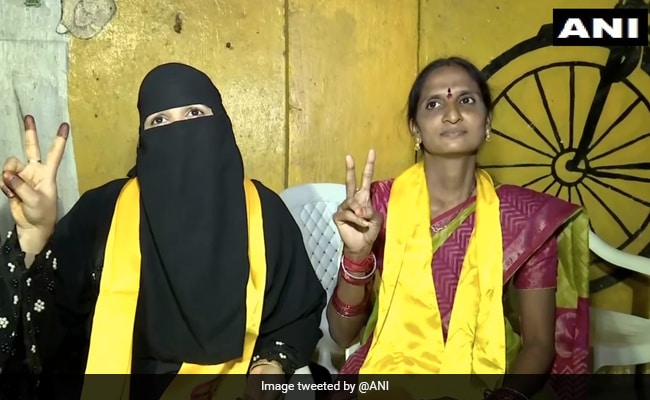 Both the candidates said they will work hard for development in their localities.

Ms Farana is contesting from Begumpet division and Ms Rekha from Ramgopalpet division.

Ms Farhana said that she will work hard for development in her area if she wins.

"I come from a lower-middle-class family. My husband is a cab driver. My brother, an autorickshaw driver has been doing social service in our area for many years. We are facing a lack of basic amenities. We had earlier approached the authorities but they never came forward in developing our division. There are a lot of problems in my locality, so I took this step," said Ms Farhana who dropped out in Class 7.

"We do not even have a graveyard in our locality. We have to take the bodies to other areas with the permission of the police or by giving an undertaking for burial. People have to keep the corpse for two days. My brother had been fighting for years and now that I have a chance to contest, we will surely win and work for development," she added.

Ms Rekha too hopes to win the election and serve the people.

"I am happy that I got an opportunity to contest an election. The rich fight and win the elections for their own betterment, but not for serving the poor or the needy. We have sewage overflow most of the time in front of our house. We have been fighting for several issues, but never got any development despite staying in the heart of the city. I am glad that the TDP has given me an opportunity to contest the elections and hope to win and serve the needy," she said.

Party leader and former MLA Katragadda Prasuna said that the party's intention is to promote the people who come from a poor background, have been experiencing difficulties and helping the people for a better future and development of their divisions.