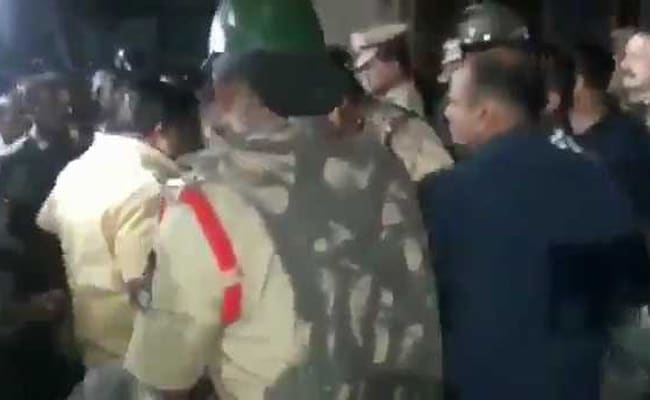 Telangana BJP legislator Raja Singh was released soon after he was detained.

A BJP legislator in Telangana was among those taken into police custody in Hyderabad on Sunday after clashes over the setting up of a shed on a land where a place of worship was demolished.

T Raja Singh, the lone BJP legislator in Telangana, turned up in the area on Sunday night to "enquire about the situation", the state BJP said.

Dramatic moments followed when the Hyderabad police chief reached the spot and dispersed the crowd.

In a video, police commissioner Anjani Kumar can be seen asking his team to take the BJP leader away. "Le jao isko, uthake le jao (take him away)," Mr Kumar tells the policemen.

Raja Singh, who was resisting the police action, was held on both sides by policemen who took him away.

Mr Singh, who goes by the handle "TigerRajaSingh" on Twitter, tweeted a video.

Mr Singh was released soon after.

He represents Goshamahal constituency in Hyderabad.

Telangana BJP leaders alleged that police behaved in a partial manner and baton-charged only members of Hindu organisations, who tried to stop attempts by the another group to encroach on the government land by defying law.

Raja Singh, who is known for his fiery speeches, has 43 criminal cases pending against him. Known for his provocative speeches, the lawmaker had resigned from the party last year in the run-up to Eid, so he would be able to "act" against cow slaughter without embarrassing the party.