How A Patient's 'Crazy' Request For A New Womb Made History 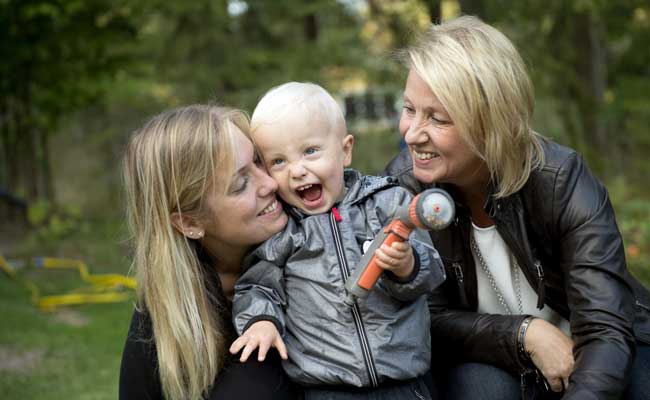 Emelie Eriksson with her son and her mother. Emelie had a womb transplant.(File)

Stockholm: When the young Australian cervical cancer patient learned she had to lose her womb in order to survive, she proposed something audacious to the doctor who was treating her: She asked if she could have a womb transplant, so she could one day carry her own baby.

This was nearly two decades ago, when the Swedish doctor Mats Brannstrom was training to be a physician abroad.

"I thought she was a bit crazy," Brannstrom said.

But Brannstom didn't dismiss her idea. Instead, after he returned to Sweden he began a series of painstaking research projects to learn whether it might be possible to transplant a womb, despite criticism that the unheard of procedure was dangerous, medically unnecessary, and impossible.

Brannstrom went on to become the first doctor to deliver babies - five so far - from women with donated wombs. No other doctor in the world has succeeded, despite attempts in the US, Saudi Arabia and Turkey, and ongoing efforts in China, Britain, France, the Czech Republic and elsewhere.

The first of Brannstom's patients' babies was born in 2014 and the fifth arrived in January; another is due in early 2017.

Brannstrom is working with doctors at Harvard Medical School and the Mayo Clinic to help women beyond Sweden get access to the procedure. Doctors at Baylor University in Texas, including two former members of Brannstrom's team, announced this week they performed four womb transplants. One was successful, but not yet ready to attempt a pregnancy.

And scientists, many of whom were both doubtful and critical before, now believe Brannstom's work could help them extend the use of organs for those who need transplants and learn how embryos implant in the uterus after conception, a poorly understood but critical stage in pregnancy.

To figure out if womb transplants were even feasible, Brannstrom first asked Rana Akouri, then one of his doctoral students, to start experimenting in rodents in 1999. He picked Akouri because of her delicate surgical skills - a mouse uterus is only less than an inch long (about 2 centimeters). The surgery was so complex Akouri needed four custom-made tools to perform the microscopic operations.

After nearly two years, Akouri noticed one day that the belly of one of her mice a slight bulge. Too impatient to wait, she performed a cesarean section that evening - and found two tiny babies inside.

That night, Brannstrom said, was the first time he thought that a womb transplant in humans might actually be possible.

"If it hadn't worked in mice, we would have quit," he said.

Over the next decade, Brannstrom and his team performed hundreds of uterus transplants in rats, sheep, pigs and monkeys. Because Sweden forbids experiments in non-human primates, Brannstrom and 10 other doctors and nurses flew to Kenya nearly 20 times to perfect things like their surgical technique and the use of immune-suppressing drugs in baboons.

Brannstrom described the less-than-ideal conditions in Nairobi - no regular showers and power failures during surgery - as "team-building" experiences. Wooden carvings of African birds picked up during those trips now adorn several shelves at Brannstrom's fertility clinic in Stockholm.

In 2012, it was time to try the surgery in humans. He obtained ethical permission to perform womb transplants in nine Swedish women. He then held an information session one evening in the southern city of Gothenburg, where the operations were to take place.

"We were quite frank in telling them, 'This is not an infertility treatment, you're participating in a scientific trial,'" he said. "We're going into the unknown."

Of the nine women who had the transplants, two had their wombs removed when complications arose. Five women had healthy babies and the last two are trying to get pregnant.

At the time, many fertility experts considered it an outlandish pursuit.

"I thought this was crazy, a high-risk surgery for no reason," said Dr Tommaso Falcone of the Cleveland Clinic in the US But a trip to Sweden to see Brannstrom's clinic changed his mind. Falcone is now at the forefront of the Cleveland Clinic's womb transplantation project. He and colleagues performed the first such operation in the US in February, although the organ had to be removed after the patient developed an infection.

Falcone predicts that Brannstrom's work will lead to a better understanding of embryo implantation. And he marveled at the fact that babies have been born from organs once flushed with a cold solution - rendering them technically dead - before being placed into the recipient.

"Miscarriages are happening all over the place but here you have these dead uteruses that can carry a baby," he said.

Other experts thought it was astonishing that wombs of some post-menopausal women were able to grow healthy babies after being transplanted. Doctors typically expect younger organs to work better, but in the case of womb transplantation, organs from older women appeared "rejuvenated" after being dosed with hormones.

"All of a sudden, you have this old organ doing things that you only expected a young uterus to do," said Dr Stefan Tullius, chair of transplant surgery at Harvard Medical School, who said that could lead to insights into extending the use of other organs.

Until now, Brannstrom has only used live donors, considered by some to be unethical because it means putting a healthy woman at risk for a procedure that isn't life-saving. The wombs are intended to be kept for a maximum of two pregnancies and are then removed so that patients can stop taking anti-rejection medicines.

Brannstrom believes doctors in other countries will soon deliver more babies from women with transplanted wombs and predicts that the surgery will one day become routine.

Promoted
Listen to the latest songs, only on JioSaavn.com
Emelie Eriksson, who received a womb transplant and then had a baby boy in 2014, said she could never thank Brannstrom enough.

"I think I need to thank him a thousand times more," she said. "He's my hero. He made it possible for me to have a child."