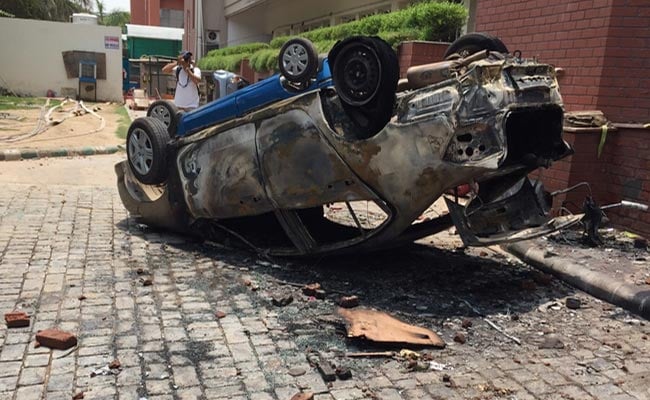 Workers at Orient Craft went on the rampage and vandalised four units, setting a dozen cars and motorbikes on fire and smashing window panes.

Gurgaon: Workers turned violent at a garment factory here on Saturday following rumours of a worker's death, leading to arson and rioting which left a few workers injured, police said.

Fear and panic gripped the sector 37, Udyog Vihar area of Gurgaon as workers at one of the units of Orient Craft went on the rampage and vandalised four units, setting a dozen cars and motorbikes on fire and smashing window panes.

It happened after rumours spread among factory workers that a fellow worker Pawan Kumar, who was injured due to an electric shock on Friday evening, had died at the hospital.

Soon, another rumour spread that four workers of the factory were trapped in a lift and were burnt alive. Both the rumours were false.

Gurgaon police commissioner Navdeep Singh Virk said, "Today at about 10 AM police station Kherki Daula received information about workers unrest in one of the units of Orient craft in sector 37 Gurgaon.

He said police reached the spot and tried to pacify the workers.

"Miscreants also broke glasses outside the building and tried to set on fire the various inflammable material stored in the factory premises. As police reinforcements reached, the situation was brought under control," he added.

"I reached the site and conducted a flag march with about 200 police personnel. There has been no reported casualty," the commissioner said in a statement.

"Keeping in view the past history of workers unrest in the factory the damage was contained in a minimum possible manner. Gurgaon police reacted swiftly to defuse the situation," he added.

"Strong police presence will be maintained for the next few weeks to ensure peace in the area," he added.