3 Dead In Building Collapse In Gurgaon Amid Heavy Rains

Over the last 12 hours, the Gurgaon Traffic Police has been sending alerts on Twitter to inform the public about areas to avoid due to waterlogging. 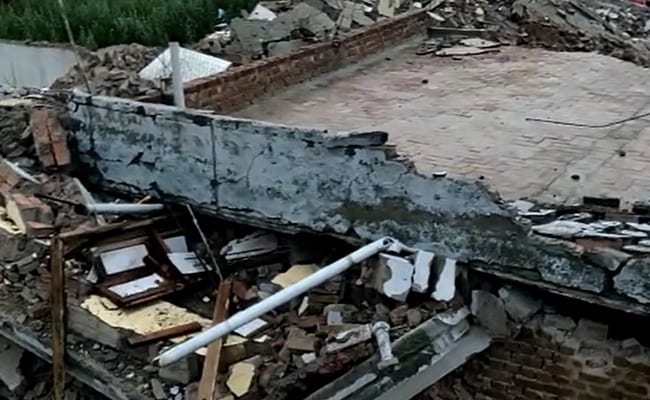 Three people were killed in a building collapse in Haryana's Gurgaon district, police said on Monday as several parts of the millennium city of high-rise buildings and glass towers came under water with images of people wading through waterlogged roads doing the rounds on social media.

The three-storey building in Khawaspur collapsed after heavy rains on Sunday night, following which the police pulled out one body from the debris.

As the incessant downpour continued through the night, two more bodies were pulled on Monday morning.

Not far away, in corporate Gurgaon, people coming into work or leaving it to head to Delhi found themselves stuck in traffic snarls on the expressway and other highways.

Over the last 12 hours, the Gurgaon Traffic Police has been sending alerts on Twitter to inform the public about areas to avoid due to waterlogging.

Fearing a repeat of a rainy, flooded morning, residents of a condominium in DLF drove out their cars to park them in a safer place.

Pictures of submerged vehicles outside upscale gated communities and people going through waist deep water were doing the rounds on social media.

Sharing a picture of a completely submerged construction area, a Twitter user wrote, "Glimpse from One of the most developed city from Haryana.... thanks @mlkhattar Ji (sic)."

Another user posted a picture from a retail showroom, where rows of blazers were lying halfway into water that had flooded the shop.
Giving a sarcastic turn to the situation of water flowing through the streets of Gurgaon, a Twitter user said the "Annual Venice Festival" had started in the district.

"The "Annual Venice Festival" kick starts in #Gurugram !! The festival is celebrated every year with grandeur with people dipping their vehicles and themselves in holy drain waters. Thanks to the government. #Venice #Rains #Monsoon," he wrote.

He complemented his tweet with a video of a heavily waterlogged road.

Others tried to be good samaritans and warned people against using certain roads.

A Twitter user posted a video from Mata Mandir road that has been inundated heavily, asking people to avoid it.

"#Gurugram This is #Gurgaon mata mandir road. Don't use this lane," he wrote. In the video, cars' headlights are almost submerged in water, and there is negligible vehicular movement in the area, while men, women and children are making their way through waist deep muddy water.

A portion of the roof of Ambience mall here had also reportedly caved in, resulting in the mall remaining shut on Monday.

Mall authorities, however, clarified that it was not a roof collapse, but a water leakage incident because of which the mall remained closed for the day.

"Due to heavy and continuous rains during the night, water leakage occurred at some points and the same is being taken care of.
However, mall management has decided to get all the electrical circuitry checked thoroughly as a safety measure to avoid any possibility of short circuit," a mall spokesperson said.