The accused told the police that the factory owner along with his wife and two more people used to manage raw material for forging the illegal firearms. 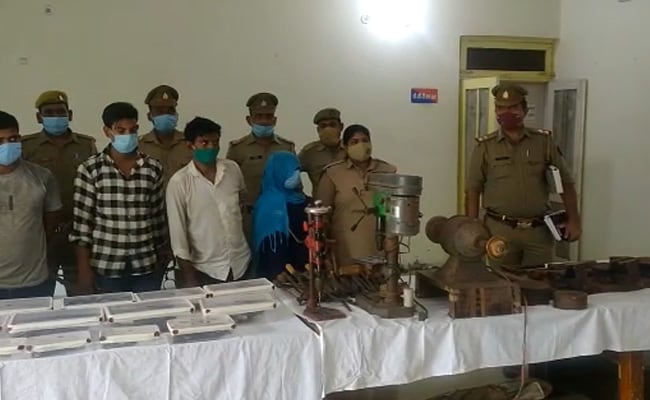 The police have also recovered Rs 1.5 lakh cash from the accused.

The police have busted an illegal arms factory here and seized a huge cache of weapons and ammunition, officials said on Saturday.

Five men have also been arrested, they said.

The illegal arms factory was being run near the culvert of Shahzadpur village road of Muradnagar town here, police said.

The accused have been identified as Mohammad Mustafa, a resident of Bihar's Munger, Salam and Kaifi Alam, both from Muradnagar, Salman, and a woman named Asgari who hails from Meerut.

Two of their accomplices -- Zahiruddin and Faiyyaz -- both from Meerut are missing, Mr Kumar said.

The accused told the police that the factory owner Zahiruddin, along with his wife Asgari, partner Faiyyaz, and nephew Salman, used to manage raw material for forging the illegal firearms.

Two days after bringing the raw materials, they were going to sell the fully finished pistols to "anti-social elements", according to the police.

The police have also recovered Rs 1.5 lakh cash from the accused.

The cash recovered was the proceeds from the arms' sale, and was kept for equal distribution and for purchasing raw material and other implements, police said.