Leena, who was trained at Indo Tibet Border Police training institute in Panchkula, gave police the crucial clue which solved the case. 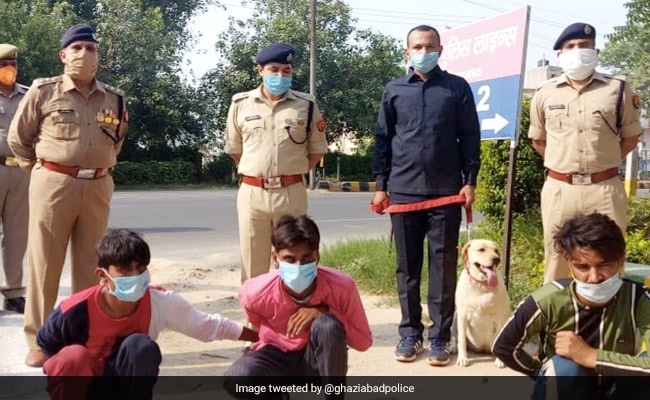 Three suspects have been arrested in the case and the police team investigating it.

Ghaziabad Police on Thursday claimed to have solved a murder case with the help of its two-and-a-half-year-old tracker dog.

Leena, who was trained at Indo Tibet Border Police training institute in Panchkula, gave police the crucial clue which solved the case.

Three suspects have been arrested in the case and the police team investigating it and Leena have been awarded by officials for excellent work.

On May 31, Vivek from Kushaliya village in the district went to work in the morning but did not return home and his body was found in a field the next day, police said.

Vivek's father Rajendra Singh had lodged a complaint in this regard at Masuri police station, they said.

On Thursday morning, police took tracker female dog Leena to the place where Vivek's body was found. Leena sniffed around for a while and then led the police team to a spot near the house of suspects, where they used to sit, police said.

After getting the crucial clue from Leena, the police team roped in an informant and further investigation led to the arrest of the three suspects, they said.

Police said the suspects -- Mohsin, Adil and Salman -- have confessed that they had killed Vivek. They told police that Vivek's motorcycle collided with their car which led to a heated argument between them.

In rage, the three men killed Vivek and dumped his body.

They had also taken away Vivek's motorcycle and mobile phone and both have been recovered from them, police said.

Man Arrested For Allegedly Killing Woman In Ghaziabad After She Rejects Proposal: Cops