Ashtami 2020: Significance of Kanjak or Kanya Puja And What All Goes In The Traditional Kanjak Bhog

The eighth day of Navratri is called Ashtami. This year, Ashtami is celebrated on 1st April 2020. On the auspicious occasion of Ashtami, several Hindu households conduct Kanjak or Kanya Pooja. 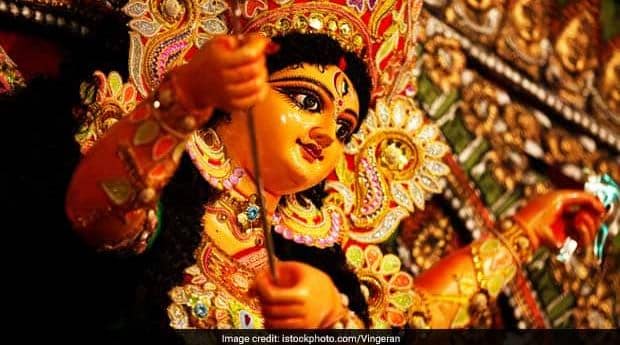 This year Ashtami is celebrated on 1st April 2020.

Hindus across the country are celebration Ashtami 2020 today. Chaitra Navratri 2020 is drawing towards a close. Navratri is a festival that's dedicated to the nine incarnations of Maa Durga. During the nine day long festival, devotees try to seek the divine blessings of Goddess Durga with abundant prayers and making several offerings. The eighth day of Navratri is called Ashtami. This year, Ashtami is being celebrated today, 1st April, 2020. On the auspicious occasion of Ashtami, several Hindu households conduct Kanjak or Kanya Pooja, where nine girls who have not yet attained puberty are welcomed into the house by first washing their feet and tying moli (red thread) around their wrists. These nine girls are then seated and offered a variety of delicacies The ritual is followed across India, but is highly popular in regions like Delhi, Punjab, Haryana, Uttrakhand, Uttar Pradesh,Madhya Pradesh and Bihar. Some families choose to do Kanjak or Kanya Puja on Ram Navami. So what is the idea of worshipping these nine little girls? Let's find out.

Significance of Kanjak or Kanya Puja

Kanjak is celebrated on either ashtami or navami (the eighth or ninth day) of Navratri. It's another way of paying gratitude to the Supreme Goddess. Nine girls are welcomed into the house and are showered with delicious bhog and gifts. These young girls who haven't yet hit puberty are worshipped as the embodiment of the nine divine forms of Goddess Durga: Sailaputri, Brahmacharini, Andraghanta, Kusamanda, Skandamata, Katyayani, Kalarati, Mahagauri and Siddhidatri.

Nowadays, one can also see little boys accompanying the girls in the Kanjak. After washing their feet with hands, the elders in the house tie a moli (red thread) around their wrists, and apply a tika on their foreheads. The girls are then served a variety of delicacies such as poori, kala chana, and halwa. They are also showered with many gifts like cute pencil boxes, hair clips, tiffin box etc.

The ritual goes back centuries in time. According to scriptures, when the earth was distressed by the demon king Kalasura, it was Goddess Durga who in her incarnation of a young girl defeated the demon. Unable to battle the mighty Kalasura, the Gods in the heaven approached Goddess Durga to seek her help. She assumed the form of a young girl or Kumari and stood in front of Kalasura. Blinded by the overwhelming power, Kalasura thought how could a little girl defeat the invincible ruler such as him, He let down his guards, thinking he would take her down without much effort. The little Goddess pulled out her sword and killed him and saved the earth from this despotic demon.

What All Goes In The Kanjak

Puffy and piping hot pooris made of either maida or atta are served to the young girls as part of the bhog. Another Kanjak staple is a delicious suji halwa made by semolina whisked in milk and ghee. The delicious halwa is usually flavoured with cardamom and garnished with almond. One can also add pistachio or raisins. Delicious kala chana fried in a pool of heartwarming spices are also an intrinsic part of Kanjak bhog. A few pieces of coconuts and dried fruits are also served to the little ones. Some families also give ladoos or chocolates as additional sweet treats.