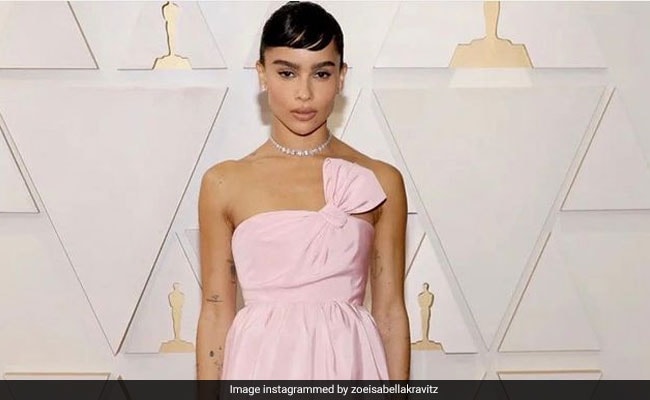 The series of celebs slamming  Will Smith and Chris Rock  after the infamous incident at this year's Oscars has only begun. After Jim Carrey calling out Will Smith for slapping Chris Rock after the comedian joked about his wife Jada's hair (more on that later), actress Zoe Kravitz has reacted to the controversy. The Batman star, who was one of the attendees at the 94th Academy Awards and the Vanity Fair Oscars afterparty, shared two separate posts, where she criticised Will Smith (without naming anyone in her post). The Kimi star shared a picture of herself on the Oscars red carpet and she wrote: "There's a picture of my dress at the award show where we are apparently assaulting people on stage now."

Because one post isn't enough, the actress also shared a picture from the Vanity Fair Oscars afterparty, where Will Smith was pictured dancing (after the slapgate) and celebrating his Best Actor win for his role in King Richard. Zoe captioned the post: "And here is a picture of my dress at the party after the award show -where we are apparently screaming profanities and assaulting people on stage now."

Will Smith slapped Chris Rock at the Oscars, who was presenting an award. The comedian said he couldn't wait to see Pinkett Smith star in 'G.I. Jane 2' which prompted Smith to go up on stage and slap Chris Rock. Jada Pinkett suffers from alopecia, which causes hair loss - she revealed in 2018 that she struggles with the condition and wears her hair shorn almost to the scalp.

Will Smith did apologise at the Oscars but only to the Academy and his fellow nominees. His official apology to Chris Rock came only a day later. His statement read, "I would like to publicly apologize to you, Chris. I was out of line and I was wrong. I am embarrassed and my actions were not indicative of the man I want to be. There is no place for violence in a world of love and kindness."

Meanwhile, Jim Carrey, during his appearance on CBS Mornings said this about the incident, "I was sickened. I was sickened by the standing ovation, felt like Hollywood is just spineless en masse," referring to the moment when Will Smith went to the stage to receive the Best Actor award for his role in King Richard and was given a standing ovation for winning his first ever Oscar even though he slapped Chris Rock on stage minutes earlier. He added, "And it just - it really felt like, 'Oh, this is a really clear indication that we're not the cool club anymore." He added that had he been in Chris Rock's position, he would have "sued" Will Smith.